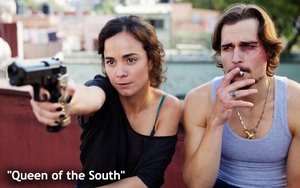 “Queen of the South” is not a Bravo reality show.

Instead, it’s the title given to this new scripted drama on USA Network about a swaggering, up-from-the-streets female queen of the Mexican drug cartels named Teresa Mendoza.

Let the record show that she has no actual scars on her face. Her scars are deeper, supposedly. They stem from a hardscrabble upbringing that she happens to mention in passing in the occasional narration she provides during the premiere episode USA Network provided for preview.

She doesn’t provide much detail about her past, except to say that she never had anything or anyone. According to this show, this makes her resourceful, especially when she’s facing almost certain death from Mexican gangsters, but then manages to extricate herself from their clutches every time.

Here then is the newest twist on TV’s antihero craze -- the antiheroine, someone you’re supposed to root for, even as you realize her ambition is to claw her way to the top of the food chain in a business where violence, cunning and law-breaking are the keys to success.

But since Teresa – placed by Alice Braga -- is good-looking and plucky, and many people (men, for the most part) have done her wrong for years, you can’t help but cheer her on. Certainly, that appears to be the aim of the producers and writers who have made this show.

Another thing they’ve done is borrow from so many gangster movies and TV shows we’ve all seen before that, in the end, much of “Queen of the South” plays like one long cliché. The narration, for example -- in which Teresa admits how much she likes living the gangster lifestyle -- seems inspired by “Goodfellas” (which has emerged in the last two decades as the template for so many of these kinds of productions).

The Mexican toughs and henchmen seen throughout the show are all types we’ve seen before. As for this show’s debt to the 1983 Al Pacino “Scarface” movie, Teresa is even shown watching the movie on TV at one point.

The scene, of course, is the one where Tony Montana cordially requests of a group of unwanted guests in his mansion that they “say hello” to his “little friend” -- a giant gun. The only thing missing from “Queen of the South” is Danny Trejo.

Not missing from this show are several examples of naughty content that have likely been included to clearly mark this show as “edgy” and not the same old thing for USA -- a network known in recent years for less-edgier fare such as “Royal Pains” and “Suits.”

Last summer’s “Mr. Robot” was a departure from the USA Network formula, and so is “Queen of the South.” Among other things, “Queen of the South” includes some words that were once never heard on commercial-supported TV but have broken through in recent years to the point where they’re heard more on TV than on a New York street.

In addition, “Queen of the South” traffics in the kind of rearview (and some sideview) nudity that has also become common on basic cable lately.

Violence, nudity and even a graphic rape scene -- this is the entertainment USA Network has in store for you this summer.

“Queen of the South” premieres Thursday (June 23) at 10 p.m. Eastern on USA Network.