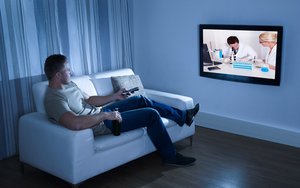 Pivotal Research Group says these results were helped significantly by use of Internet-connected devices, such as Roku, Apple TV, and Chromecast -- which rose 56% year-over-year. Pivotal says these devices now account for 7.1% of total TV use among 18-49 viewers on a total day basis.

For the month, Viacom produced the largest share of 18-49 C3 commercial impressions (average commercial ratings plus three days of time-shifted viewing), among all national media owners, at 16.0%. This is down from the 16.7% result of a year ago.

Viacom, like other networks, is cutting back on what had been high commercial glut among some of its networks.

Overall, average hourly national TV advertising loads in May grew slightly to 10 hours and nines minutes from 10 hours and seven minutes in May 2015.