Despite Founder's Scorn, Lululemon Powers On With Digital Marketing 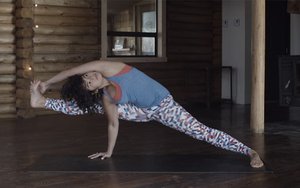 Lululemon just turned in very impressive quarterly results, and—compared to other retailers—is currently a shining star both on Wall Street and the world’s yoga mats. But that hasn’t stopped founder and former CEO Chip Wilson from coming after it with not-so-Namaste criticism, attacking its “old school” board of directors.

In a presentation to investors today, CFO Stuart C. Haselden added a little more luster to Lulu’s performance. Earlier this month, the Vancouver-based company reported a 17% jump in revenues to $495.5 million, from $423.5 million in the first quarter of the last fiscal year, a 6% gain in comparable sales, and a 3% rise in comparable-store sales. E-commerce advanced 18%.

Speaking at the Jeffries 2016 Consumer Conference, which was webcast, he specifically singled out the marketing success of its Align crop pants, introduced in April. “When we focus on innovation, we win,” he says. “When we innovate in fabrics and construction, we can distinguish ourselves in the marketplace. Pants have been delivering double-digit comps since the third quarter.”

Smarter digital marketing has been part of the success. “The Align crop video, released in April on Instagram, gave us the best results we’ve ever had, with some 300,000 views. This was the first time we synched brand marketing with a product introduction, and we are looking at more ways to leverage brand marketing around these events.”

He also elaborated on the company’s strategy to focus not on store expansion, but on increasing square footage in its best-performing units. In the Boston store in Prudential Center, for example, a 30% gain in size has led to double-digit comparable store sales. (It plans seven more such expansions.)

And Haselden reiterated the retailer’s intentions to double sales and more than double profits within the next five years, including more than doubling its men’s clothing, as it continues to expand internationally.

While that may be enough to push it to the top of many analysts’ buy list—by some measures, it has outperformed companies like Under Armour and Nike—it’s getting nothing but shade from Wilson, who issued an open letter to shareholders earlier this month, calling for a shakeup in its board of directors and a “strategy with urgency.” Wilson still owns about 14% of the company

By his way of thinking, Lululemon, which many say more or less invented the athleisure market, should be eating Under Armour’s lunch.

Wilson, whose departure from the company he founded was sparked by the epic Let’s-Make-See-Through-Yoga-Pants-Then-Blame-Women-For-Being-Fat Affair of 2013, was having none of it.

“By now, Lululemon should have been seven years ahead of everyone in the market, and be worth double the value of Under Armour. It should have owned women’s bras by now, and be selling as many as Victoria’s Secret.”