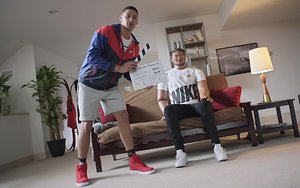 With the NBA Finals barely in the rear-view mirror, a slew of brands are banking on all sports fans being focused on the NBA Draft, which is slated for Thursday evening.

State Farm is the presenting partner of the NBA Draft 2016. Earlier this week, State Farm teamed with NBA Cares for the dedication of the mobile Teen Learning Center to the Educational Alliance Boys & Girls Clubs’ Edgies Clubhouse (NYC). Chris Paul and several draftees participated and gave the club 25 Draft tickets.

At the Draft, the insurance company will receive heavy in-arena signage and media benefits, including presenter status of Draft coverage on NBA TV and a 45-second video (during broadcast) and Twitter callouts. State Farm will debut a vignette series on NBA.com and league social channels featuring Draft candidates Denzel Valentine, Brice Johnson, and Skal Labissiere.

Foot Locker released two TV ads linked to the draft. Featuring top draft pick Ben Simmons, the spots will air nationally on ESPN during the live broadcast. The spots focus on Simmons seeking advice for his upcoming rookie season. In "It's Not Real Yet" -- set prior to the Draft — Simmons produces his own, homemade Foot Locker commercial alongside a life-sized papier-mâché version of NBA star Karl Anthony Towns. The second spot, titled "It's Real Now," features additional NBA talent — Karl Anthony Towns, Devin Booker and D'Angelo Russell — giving Simmons some much-needed advice on life after the Draft.

Gatorade will have in-arena presence through branding (including a 30-second TV spot on the Jumbotron) and product (bottles on draftee tables). The brand also will fulfill “Sweat With The Best” promotion through a VIP fan experience including a photo with the entire class and a skills clinic with Nuggets’ Gary Harris.

Verizon will have in-arena branding via logo integration and charging units throughout the venue, including concourse and back-of-house. In-arena, go90 will present a 90-second video highlighting the 1996 NBA Draft — one of the best Draft classes in NBA history.

Other brands with activations include American Express, which will host an exclusive hospitality experience for 140 card members, featuring a photo on the Draft stage and meet-and-greet with Kia NBA Rookie of the Year Karl-Anthony Towns.

BBVA will introduce three cross-platform vignettes featuring draftees Brandon Ingram, Jamal Murray, and Buddy Hield. The 15- and 30-second videos will live on BBVA digital channels, NBA.com/rooks and players’ social channels and focus on their personal journey(s) to the Draft.

Harman will place (black and gold) headphones on the tables of JBL-signed draftees during Draft night and will debut the JBL Vine Booth to capture and share — via NBA Vine and Twitter — the picks’ early reactions and first "digital" autographs (in real-time). While at the booth, draftees will wear custom headphones featuring their respective team logos.

Samsung hosted a sweepstakes with the prize a VIP Draft experience, including a photo with the Draft class and meet-and-greet with Kia NBA Rookie of the Year Karl-Anthony Towns. The brand also will host a custom gifting lounge to outfit Draftees with the partner’s latest devices.

As Official Timekeeper of the NBA, Tissot's logo will be featured on the on-stage Draft Clock, which displays the amount of available time between each selection. Tissot will host a gifting suite ahead of the Draft to fit candidates for personalized watches, which they will receive shortly after they are selected on Draft night (first round selections).

Under Armour hosted a youth basketball clinic at Basketball City in NYC on June 22. Several Draft candidates were onsite to help outfit youth participants in Under Armour apparel.