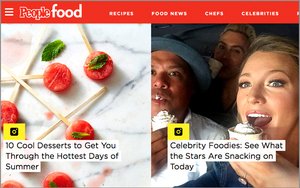 According to a spokesperson, the verticals open up new sponsorship opportunities for brands to work with the publication.

People has hired additional staff to launch People Home and People Food and has plans to branch out with more travel, pets and family content in the near future, the spokesperson added.

The expanded lifestyle content will give readers more access to the homes and lifestyles of their favorite entertainers, celebrity chefs and design stars.

The verticals will live in the back of the magazine, alongside People Style, People Beauty and People Body, Jess Cagle, editorial director of People and Entertainment Weekly, wrote in an editor’s note.

“[The verticals are] full of tips, advice and hacks to help you go from feeling ordinary to extraordinary. And it’s designed (like everything we do) to entertain, empower and inspire,” Cagle stated.

In this week’s issue, People Food will feature a July 4th recipe special of all red, white and blue foods, including a Black Tap NYC Stars & Stripes RW&B Milkshake created exclusively for the magazine.

People Home will tour Sutton Foster’s Upper West Side apartment in a print and video feature. Online, People Food will debut the “What I Really Cook For Dinner” video series, featuring co-host of ABC’s “The Chew” Carla Hall, which takes viewers inside the kitchens of top chefs to reveal what they cook for dinner after a long day.

People Food will have seven new cross-platform editorial franchises, including “Food Hacks,” a Snapchat, video and print franchise with kitchen tips inspired by celebrities and chefs, and “Take 5,” a video and print feature featuring recipes with five ingredients or that take five minutes to prepare.

People Home will feature more than 10 new editorial franchises. They include “At Home,” a print and digital franchise that gives readers tips on how to recreate the look of a celebrity’s home on a budget, and “On the Market,” a print feature and digital gallery that gives an exclusive look inside the homes of stars selling their properties.