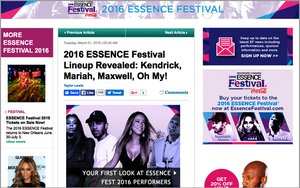 Essence magazine is expanding their consumer reach with a beauty and style expo at its 2016 Essence Festival, sponsored by brands like Coca-Cola and Ford.

The festival, which takes place in New Orleans from June 30-July 3, will have five daytime programming themes, including Entrepreneurship, Entertainment All Access, Election 2016 and Empowerment & Inspiration.

The daytime events are free and open to the public, with ticketed evening concerts.

The magazine, which focuses on female African-American readers, will have celebrity meet and greets at the event. There will also be musical performances, interactive panel discussions and over 40 activations hosted by Essence corporate partners, like Coca-Cola, Ford, McDonald’s, State Farm, Verizon and Walmart.

“This year, we’ve expanded the footprint of our daytime experience by more than 125,000 square feet in the Ernest N. Morial Convention Center, increasing our programming offerings and curating more content than ever before,” stated Essence president Michelle Ebanks.

This is the 22nd year for the Essence Festival, which attracts an average of 100,000 people a day. According to WWD, Essence will promote its beauty box at the festival, as well.

Coca-Cola will host a block party, Ford will let attendees test drive their cars and Verizon will have complimentary biometric charging, for example. The Essence festival will also host more than 200 fine art exhibits and nonprofit organizations.

WWD reports that Essence will bring its festival overseas this November, with its first stop in Durban, South Africa.