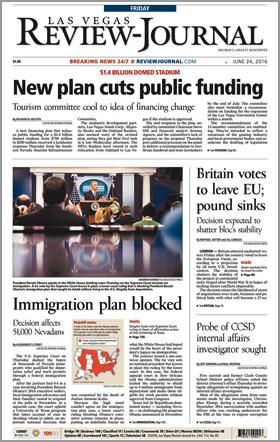 The Las Vegas Review-Journal is reinforcing the expansion of its celebrity and entertainment news coverage with the hiring of entertainment journalist Robin Leach.

He is known for his 14-year run on ABC's "Lifestyles of the Rich and Famous” and his role in launching "Entertainment Tonight" and the Television Food Network.

Leach was formerly at the Las Vegas Sun with entertainment editor and writer Don Chareunsy, who is also now LVRJ to produce expanded celebrity, lifestyle and luxury content for the publication’s Niche division.

Leach will also be part of advertising-sponsored content in the Friday Neon entertainment section and Sunday Life section.

LVRJ’s vice president of advertising and sales, Kimberly Parker, stated that these strategic hires and expanded investment is an effort to boost entertainment and celebrity content both in print and online.

Parker also laid out the publication’s plans for expansion to “grow readership and develop new platforms, including a possible TV station, a new daily website and even a citywide shopping guide that encompasses the Las Vegas Strip's 11 million-plus square feet of retail.”

According to Craig Moon, publisher of LVRJ, there is a lot of under-reported celebrity and lifestyle stories in the Las Vegas area, creating a lot of opportunity for LVRJ content, especially given today’s “heightened public interest in celebrity and entertainment headlines.”

Additionally, Luxury Las Vegas editor Leslie Frisbee is being promoted to oversee the LVRJ's Niche division as its director of content strategy while continuing her duties as editor of Luxury.
celebrity, newspapers
Next story loading