Classic Game Shows Are Among TV's Most Durable Brands 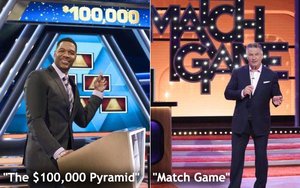 What are TV’s most enduring brands?

At the moment, it would seem to be the medium’s classic game shows. Four of them are back on TV in new versions this summer, with the oldest of them -- “To Tell the Truth” -- dating back 60 years to 1956.

The new “To Tell the Truth,” with host Anthony Anderson of ABC’s “Blackish,” started airing Tuesday nights on ABC earlier this month. And this weekend, ABC will launch its summer Sunday lineup of game shows starting with “Celebrity Family Feud” at 8 (hosted by Steve Harvey), and followed by the premieres of new versions of “The $100,000 Pyramid” at 9 (with Michael Strahan as host) and “Match Game” at 10 (hosted by Alec Baldwin).

Meanwhile, four other classic game shows (or “quiz shows,” depending on which ones you’re talking about) are already on -- with three of them running for decades in their current versions. Those three are, of course, “The Price is Right” on CBS (dating from 1956), and the syndicated “Wheel of Fortune” (original version: 1975) and “Jeopardy!” (original version: 1964).

Rounding out the list is “Let’s Make a Deal,” which dates back to 1963 and was revived by CBS for mid-mornings in 2009 with host Wayne Brady.

What’s really amazing is the durability and familiarity of these titles. Who in the world has never heard of them? One answer to that question might be: Millions of people too young to have ever formed a bond with them -- particularly the ones other than “Wheel,” “Jeopardy!” and “The Price is Right.”

These three have been running every day for the entire lifetime of anyone born since their respective debuts. As for the four game shows on ABC, the network has apparently determined that “To Tell the Truth,” “Family Feud,” “The $100,000 Pyramid” and “Match Game” each possess just enough brand strength for the network to grant them access to some of its most precious prime-time real estate this summer.

And the gambit (no pun intended, “Gambit” fans) just might work for a reason that might be deceptively simple. Readers of this TV blog who are much more expert than I am on the subject of game shows are free to agree, disagree or elaborate on this hypothesis, but it seems to me that classic game shows and quiz shows work because of the relative simplicity of their concepts. If the concept is easy to understand, and if the average person can follow it and even play along at home, then the connection between viewer and TV show is made.

For example, take “The Price is Right.” This show’s concept consists basically of guessing the prices of some of the world’s most ordinary consumer products. It taps into a mundane but essential activity that people undertake almost everyday, which is shopping for groceries. Not only is this task common to virtually every person of every age and background, but the show presents multiple opportunities in every episode for showcasing sponsors’ products. It’s just pure genius.

“Wheel of Fortune” does this too. It has these puzzles that are just challenging enough to make playing at home a fun, but easy thing to do. And the soundstage where this show is filmed is festooned with sponsors’ brands.

Of the eight shows cited here, the late Mark Goodson either created and/or produced four of them (along with partner Bill Todman). This makes Goodson, who died in 1992 at age 77, one of the top producers in prime-time TV today, with three of his shows on ABC -- “Family Feud,” “Match Game” and “To Tell the Truth.” “The Price is Right” was one of his shows too.

One day, sometime in the 1980s, when I was a young reporter on the television beat working in midtown Manhattan, I was standing on a Fifth Avenue street corner somewhere in the 40s, when I noticed Mark Goodson standing next to me. I never spoke to him, but I observed him as he nodded almost imperceptibly to someone or something and then, moments later, a car suddenly rolled up in front of us to pick him up.

It was a dark blue stretch Bentley, and it was the grandest automobile I have ever laid eyes on. Unlike most such limousines, its windows were not tinted, which meant the passenger-owner had no desire to ride in it sight unseen.

And why not? He was the king of game shows then. And now, apparently, he still is.

tv
1 comment about "Classic Game Shows Are Among TV's Most Durable Brands".
Check to receive email when comments are posted.
Next story loading