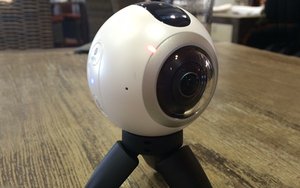 Samsung has launched an Explorers program that aims to teach advertisers about virtual reality, since many have a limited understanding, according to Tara Kriese, the company's senior director of VR marketing.

She said there is also a plan to work with creators to distribute the content built on its platform.

"VR is going to change consumer experiences a lot, similar to what the Web did early on," Kriese said. "Shooting in 360 is very new and figuring out best practices isn't easy. By the time these cameras get in consumers' hands, they will know how to use it."

Partners participating in the program include Six Flags, with others to be announced soon. For Six Flags, Samsung created an experience for one of the amusement park's roller coasters now available at nine of its theme parks across America.

The amusement park began handing out Gear VR headsets to riders, changing the experience of an aging ride.

"It allows the roller coaster to become a pallet for new experiences," Kriese said. "Six Flags can repaint the story line whenever they choose."

Content creators use the Samsung Gear 360 to shoot the digital content that people view through the VR headset. Augmented reality and holographic imagery will come next, Kriese said.

It has been a long wait for VR fans to get a glimpse of the camera. Shortly after announcing Gear 360 at Mobile World Congress in February, the company said the U.S. would not be among the first markets to get their hands on the VR camera.

VidCon was the first place in the U.S. that advertisers and content creators had a chance to see Gear 360 up close at work.

VR has become the next bright shiny object, so introducing the immersive Gear 360 camera in the U.S. at VidCon with creators before it goes on sale to the general public later this year seems part of the plan to build excitement for the hardware.

The first introduction of the camera came earlier this year from YouTube star Casey Neistat, when he took a Samsung Gear 360 camera to the Oscars. Then just prior to VidCon, Samsung gave the camera to 10 YouTube creators and held a film premier at the event, allowing creators to start buying the camera before it goes on sale later this year.

Samsung Theater, built inside the Creators Lounge, showcased video creator Neistat and a series of 360 films shot using the Gear 360 by a hand-picked group of YouTube artists at VidCon. The biggest challenge—creators must use Gear 360 with specific phones.