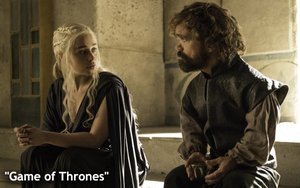 Explosions of all types have long been a part of action movies and TV shows (and it should be noted, real life too, unfortunately).

So when you are going to stage an explosion on a TV show today, you had better go for something special. Such was the case Sunday night on the season finale of “Game of Thrones” on HBO, in which a vast cellar lined with barrels of gunpowder (or some other great stockpile of detonatable ordnance) was ignited.

The conflagration consumed an entire castle complex and everyone in it -- including a number of key characters who I am not knowledgeable enough about this show to tally.

Not only did the show burn some of its top personalities, but the flames that consumed them were green, not orange and red -- a novelty in and of itself that set this firestorm apart from all others.

What a competitive arena TV has become -- the lengths that TV companies have to go to these days to produce shows that stand out. This was the thought I had over and over while watching this 68-minute episode, which closed out the show’s sixth season. Has there ever been a TV show as spectacular as this?

I won't belabor you with a recap of what happened on the “Game of Thrones” season finale last night. Forgive me if I have written this before, but recaps -- which so many people seem to delight in writing following the conclusion of a much talked-about TV show – serve little purpose.

Interested parties who love “Game of Thrones” most likely made a point of watching it last night, so they already know what happened. And those who haven't seen it yet and are planning to do so some time this week, will not appreciate being told what happened.

Some who read this might argue that a recap written by a qualified commentator might actually be filled with insights of value to “Game of Thrones” fans eager to discuss the show’s nuances. That's another reason I won’t recap the show: I'm not an expert on it, although I have seen most of its episodes through six seasons.

It's too sprawling for me to really get the hang of it, although I am sure that other, more dedicated fans can recite the names of the seven kingdoms and even tell you the names of everyone who died in the fire last night.

I have never found these details to be important, however, when enjoying “Game of Thrones.” This show is so arresting on so many levels that, to me, the sum is greater than its parts. Overall, I watch this show with a sense of amazement that something produced for television -- still a small screen compared to movie theaters -- can be this grand, eye-popping, imaginative and expensive (presumably).

“Game of Thrones” is epic in the way Cecil B. DeMille movies used to be described, with their casts of thousands, their warring kingdoms and autocratic rulers. The fact that a production on that scale -- or even exceeding it -- is being made for television is an indicator of how much TV has ascended in the last decade and a half.

It’s due to a combination of factors, not least of which is the competitive landscape. With this show, HBO seems to be saying to all of its competitors in the original content business: Try and top this. Sure, we can all make comedies and dramas that critics will like, since they seem to like everything that comes to TV or online streaming these days with a patina of sophistication.

tv
1 comment about "'Game Of Thrones' Season Finale: Behold The Awesome Power Of TV".
Check to receive email when comments are posted.
Next story loading