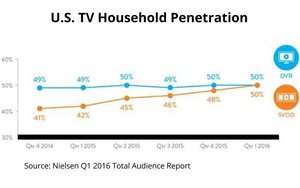 In what appears to be another tipping point for over-the-top consumption of TV and video programming, Nielsen this morning released figures estimating that Internet-based digital subscription-based video-on-demand services (SVOD) such as Netflix, Hulu and Amazon Prime are now available in 50% of U.S. TV households.

While there is no explicit demarcation for what constitutes critical mass for the penetration of a new media platform, 50% has been a historic rule-of-thumb, representing a point when more than half the population can now be influenced by it. When cable TV reached 50% penetration in the mid-1980s, that’s when Madison Avenue began taking it seriously as an advertising medium and began allocating line items in television budgets, such as Ted Bates’ famous 5% solution.

While penetration doesn’t necessarily equate to viewing behavior, it represents an increasing propensity for behavior to change. As a benchmark, Nielsen pointed out that SVOD services have attained the same reach as digital video recorders (DVRs), which at one point were seen as the most disruptive new technology influencing TV -- especially TV advertising -- viewing behavior.

Significantly, many SVOD services (Netflix, Amazon, etc.) do not have advertising, while another biggie (Hulu) has been moving away from it in favor of premium models.

The inflection point was released as part of Nielsen’s first-quarter 2016 Total Audience Report this morning, and the research firm pointed out that it is part of a progression illustrating how “viewers have a continued desire to control what they watch and when they watch it.” 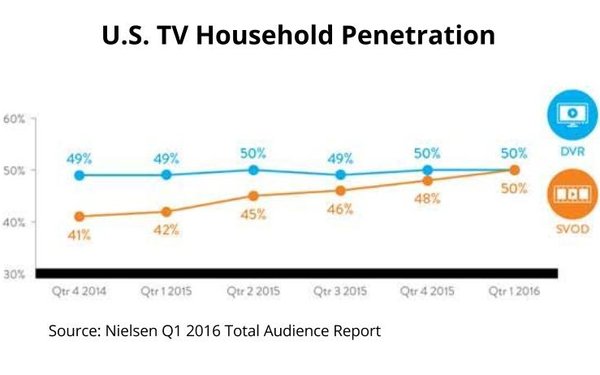