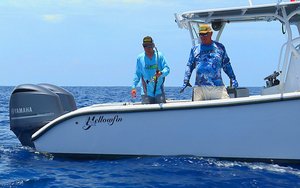 John Brownlee will serve as host and executive producer of the new series, showcasing the places, people and fishing found throughout the coastal U.S. and several international destinations.

The show will also highlight gear used in the sport.

“It’s a logical extension to get into video and bring the pages of the magazine to life,” Brownlee told Publishers Daily. “It adds a new dimension of movement and sound.

"You get to see the people you read about and hear them speak, and that’s a little bit magical. That’s the way we can extend what the magazine is doing and bring it to a whole other level.”

Brownlee told PD there will be 13, 22-minute episodes per quarter, and they will run two quarters December 2017. So far, they have shot seven original episodes and are aiming to shoot as many as 10 or 11 — the rest will be re-runs.

Brownlee said the show aims to profile the location, as much as the fishing, spotlighting the culture, food and people.

“We try to show why each place is unique, and not just because of the great fishing,” he said.

“Anglers Journal Television” will be produced by Warren Miller Entertainment and AIM Studios of Boulder, Colorado, both subsidiaries of AIM.