Selling A TV Show? The More Ridiculous, The Better 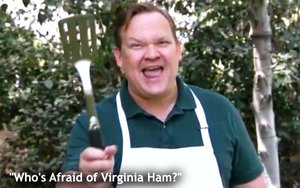 How does one go about getting a TV show from the idea stage to actual production? Much of it must be a matter of dumb luck -- reaching that particular person who just might look at your idea, and instead of pushing the delete button, then says to him -- or herself: Hmm, this guy might have something here.

Like many people -- including, I presume, many readers of this TV blog -- I harbor ambitions of my own when it comes to breaking into the biz with TV show ideas I’m passionate about. (I just threw in the word “passionate” here because everybody does it. Truth is, I’m not really passionate about these ideas -- just passionate about the idea of making money off of them).

So if any TV execs are reading this, here are some TV show ideas I have come up with that I cordially ask you (actually, beg you) to please consider (and don’t even think of stealing them; they’re all copyrighted -- I swear!):

“Are You Smarter Than a Chimp?”: Perfect for Animal Planet or summers on Fox, this fun-filled quiz show, inspired by “Are You Smarter Than a 5th Grader?,” will pit reasonably intelligent humans against chimpanzees in a faceoff that will determine which is the smarter species. Humans and chimps share 98.8 percent of their DNA, and depending on the subject matter, this weekly competition can go either way. For example, if the subject is “bananas,” the chimps will have the advantage. Proposed host: Craig Ferguson.

“The Frying Nun”: Like firehouses everywhere, convents usually have that one sister whose culinary creativity sets the other sisters’ mouths a-watering whenever it’s her turn to do the cooking. We’ll search for the best convent cook in America to star in this new cooking show that will combine food and spirituality in one tasty and enlightening weekly half-hour. For the Cooking Channel or PBS.

“Dwarf Wharf”: Don’t condemn this new concept in unscripted television based on its title. Designed for TLC or co-owned Discovery Channel, this show will combine the best of TLC’s little-people shows with the action and suspense of Discovery Channel’s “Deadliest Catch.” Set in a seaside community inhabited by little people involved in the fishing industry, “Dwarf Wharf” will feature a group of unforgettable characters and their families in heartwarming situations that every viewer -- big or little -- can identify with.

“Who’s Afraid of Virginia Ham?”: Well, no one’s really afraid of ham, but this show’s catchy title is designed to help position it as a celebration of all-American regional foods -- their unique histories, where to find them today, what to look for when you do find them, and of course, how to prepare and enjoy them. Target network for this show: Travel Channel. Proposed host: Andy Richter (pictured above).

“Is It Kosher?”: This new cooking-competition show -- designed to be compatible with the cooking-competition shows on Food Network such as “Chopped” and “Iron Chef” -- will have kosher cooks facing off before a panel of rabbis who will be challenged to answer the ultimate cooking question: Can food this delicious still be kosher? Of course it can! And yet … what if it isn’t? Proposed host: Jewish rapper Matisyahu.

“Who Wants to Be My Running Mate?”: Reality-TV legend Donald Trump applies everything he learned on “The Apprentice” to this timely reality-competition show that will decide who will join him on the GOP ticket. It’s a lighthearted summer series which nevertheless could have serious implications for the future of our nation. Possible contestants: Chris Christie, Sarah Palin, Dennis Rodman.

Note: This show has to be rushed into production soon, so if you are interested, please contact me ASAP. I look forward to hearing from all of you.