Back To School Underway; Staples Taps Perry To Reach Teachers 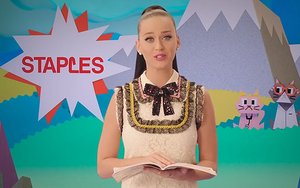 Yes, we know plenty of people haven’t even firmed up their July 4th plans, but the retail calendar can’t slow down for slackers: Early research indicates that parents are already hard at back-to-school shopping. And in a push aimed at getting teachers focused on September, Staples has just introduced a new PSA, again teaming up with pop star Katy Perry.

The whimsical ad benefits a group called DonorsChoose.org, which has helped teachers fund about 700,000 classroom projects, affecting more than 18 million students. Staples, which has donated $1 million to the group, allows people to donate in stores as well as online. It says it wants to raise awareness about the struggles teachers face in classrooms, with 99.5% of all public school teachers saying they end up using their own money in classrooms, often spending more than $400 a year.

This year, the Framingham, Massachusetts-based retail chain is including a sweepstakes, so that anyone who spends $25 or more at Staples can enter to win a $50,000 scholarship, with the chance to meet Perry.

Aya Tanimura, who worked with Perry on the videos for “Roar” and “Birthday,” directed the spot, using stop-motion animation and paper cut-outs.

Meanwhile, looks like back-to-school is well past kickoff, and early signs are positive. Yahoo, in research done with Ipsos, reports the average back-to-school shopper plans to spend significantly more this year, an increase of 37% from the average of $343 in 2015. And 46% say they intend to start researching their purchases two months before school starts, with most of their purchases last year taking place between one and two months before school opens again.

Yahoo also reports that 50% use a mobile device to shop, and more than 90% say the mobile Internet helps with their back-to-school shopping choices.

back-to-school, retail, yahoo
1 comment about "Back To School Underway; Staples Taps Perry To Reach Teachers".
Check to receive email when comments are posted.
Next story loading