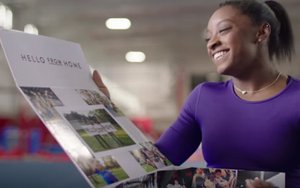 The 122-year-old company and its flagship brand announced a five-year Team USA sponsorship last October and its first special-edition packaging designs in April.

The creative, from Arnold/Havas, shows friends and family members who have supported the athletes in their journeys to the Olympics, talking about them and writing notes — and the athletes’ reactions as they read the notes, which have been enclosed in Hershey’s Milk Chocolate Bars. (See below for the Biles video, and YouTube for the Burroughs video. Weggemann’s video has not yet been released.)

The long-form videos are now live in online ads, as well as being featured on Hershey’s social channels.

In addition, 15-second versions will be aired in a national television campaign that will launch on July 18.

Over the summer, Hershey’s will encourage consumers to use #hellofromhome and submission tools to send their own notes of support to Team USA athletes during training and the competitions.

Some consumer notes also will be chosen to be featured on the wrappers of Hershey’s Milk Chocolate Bars, which will be delivered to Team USA at the USA House in Rio and through care packages specifically created for Team Hershey athletes.

Asked why Hershey decided to become an Olympics sponsor starting with the 2016 Rio games, Mary-Ann Somers, VP, North American confection, The Hershey Company, said: “Both Hershey and Team USA share a unique, irreplaceable place in the hearts, lives and memories of many Americans. We want our country and athletes to know that Hershey is here to help bring moments of goodness and patriotic pride throughout the games and beyond.”