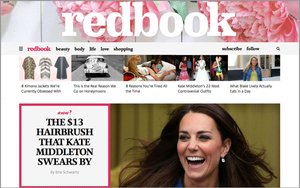 Cosmopolitan.com site editor Amy Odell will add the role of director of editorial strategy for sister site Redbook to her title.

Odell told Publishers Daily her priority is to establish "a unique, smart, funny, conversational voice that will appeal to women at the phase of life the Redbook reader finds herself in."

Maybe she has kids or is thinking about starting a family. Perhaps she's thinking about buying a home or figuring out how to decorate one — all while she is advancing in her career, Odell notes.

"We want to create a place on the Internet just for her, that speaks to her the way her best friend does.”

She added Redbook will hire new writers, especially in the parenting beat.

Odell stated that she was drawn to Redbook, which covers beauty, fashion and relationship topics for a demographic of women slightly older than the Cosmopolitan brand, since “it’s real and relatable with lots of personality.”

She and Ashley Mateo, who joins as site director of Redbook.com, will work to create “an even bigger, more engaged community of Redbook readers on the internet,” Odell says. Mateo reports to Odell.

Hearst digital editors are separated from their print counterparts, according to WWD, and report to a digital executive instead of the magazine’s editor-in-chief.

According to a statement from Hearst, Cosmopolitan.com’s traffic and social following has “more than tripled” under Odell’s leadership, as well as expanded editorial content to include feminist, political and LGBTQ topics and relationship, parenting, tech, fashion, beauty and celebrity coverage.

Odell joined Hearst from Buzzfeed in 2013.

Before joining Redbook, Mateo was the digital deputy editor at Shape and also held various editorial roles at Refinery29, Self and Hearst’s Seventeen.