Gun Crazy: America Loves Its Firearms, And So Does TV 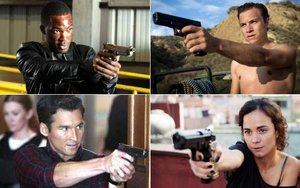 In case you hadn’t noticed, TV bristles with firearms -- just like the society in America that you can rely upon it to reflect.

America, like TV, is armed to the teeth. And everybody’s talking about it. Every day, the debate rages. America is gun crazy, say the anti-gun people. Guns are too easy to buy, the critics complain. And some of the weaponry is military-grade, they point out. In the wrong hands, these firearms are many times more deadly than would seem necessary for anyone but a soldier in Afghanistan or a nut here at home.

On the latter, we all know what’s been happening far too often in this country: Mass shootings, otherwise known as massacres.

In the wake of these horrific events, speeches are made and protests are held. Recently, members of the U.S. Congress actually staged a sit-in inside the Capitol building to demand stiffer gun laws.

After the marches and sit-ins, however, many of the people who complain and protest about guns then go home and watch TV shows that are the most violent in the history of the medium. And that’s saying a lot, because TV has always been violent.

Where this issue is concerned, the big difference today is: Nobody ever complains about it anymore. In other words, we live in a country where people use guns to settle disputes, work out their psychoses, or just kill each other by accident -- and people protest by the thousands. Then, these same people go home and watch the elaborately choreographed bloodbaths seen routinely on TV, or play video games in which they get to actually participate in such bloodbaths (virtually, of course).

I am not drawing a causal connection here between TV violence and real-life violence. I am not a sociologist and would never venture to theorize that the former plays a role in causing the latter.

Some of our biggest media companies seem to want it both ways. They’re so big that they own entertainment platforms on which violent content is prevalent, while at the same time operating news-and-talk networks where many of their personalities and their guests drone on and on about our violent society.

They even use the violence in their entertainment shows as a selling point. That’s why it was so easy for me to go and find the four gun photos above that accompany this blog. They were available on the proprietary Web sites the big TV companies maintain for TV reporters, editors and columnists to find publicity materials. The photos above are from (clockwise from upper left): The new “24: Legacy,” coming next season on Fox; “Animal Kingdom” on TNT (Turner/Time Warner); “Queen of the South” on USA Network (NBCUniversal/Comcast); and “The Catch” on ABC (Disney).

The last time I can remember a debate over TV violence was some time in the late ’90s or early ’00s. The early ’00s in particular was a time in which the broadcast networks upped the violence quotient in an effort to level the playing field with HBO, which was drawing audiences and critical acclaim with shows that, for their time, were among the most violent ever to be produced for TV (most notably “The Sopranos” and the prison drama called “Oz”).

But some members of Congress were threatening the networks with scrutiny in the form of public hearings to discuss the proliferation of violence on TV. When I wrote about the subject at that time, for the newspaper where I once worked, we often made a point of illustrating these stories and columns with gun photos blithely supplied by the network publicity departments.

Some time during this dust-up over TV violence, however, the networks got wise. They did nothing to curb the violence on their air, but suddenly, all photos of characters wielding guns vanished from the press materials the publicity departments packaged to promote their shows.

We can’t prevent journalists from writing about TV violence, the networks seemed to be saying, but we’re not going to let them illustrate these stories and opinion pieces with gun pictures that we provide to them. No siree, Bob.

I guess the conflict I am struggling to define here is this: We apparently love to watch violence. But then we decry our violent society. And yes, I am aware there is a big difference between the simulated violence on a TV show in which nobody really gets hurt and the real thing in which the consequences are horrific.

If only all of the violence in the world was merely entertainment violence. Unfortunately, though, it’s not.

tv
2 comments about "Gun Crazy: America Loves Its Firearms, And So Does TV".
Check to receive email when comments are posted.
Read more comments >
Next story loading