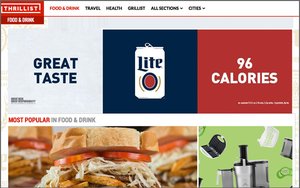 Thrillist Media Group's content lab The CoLab is launching its first incubated media brand. Called Supercall, the new platform is unique because its inception comes from a content marketing team rather than from editorial.

Supercall will cover the “lifestyle of drinking” as well as “the intersection of niche spirits coverage,” according to a statement.

Liquor company Diageo, which manages brands from Tanqueray to Smirnoff, is the founding sponsor of Supercall, as part of a three-year sponsorship agreement.

According to The Wall Street Journal, the CoLab team will produce content for the new site on behalf of Diageo brands.

However, Supercall runs as an independent editorial property. These branded articles and videos will make up roughly 5% to 10% of Supercall’s content.

The rest will be produced by CoLab editors, which Diageo will not have any influence over. Supercall will also feature other advertisers.

“We saw an opportunity to leverage the infrastructure we’ve built over the last decade to delve deeper into certain categories we’re passionate about – and that we identify as underserved in the media landscape. It’s the content we’ve always wanted to create, but didn’t technically make sense for Thrillist,” stated Ben Lerer, founder & CEO of Thrillist.

Supercall will take advantage of TMG’s proprietary CMS and data and analytics platform called Pinnacle, Thrillist audience development systems and strategies, as well as The CoLab’s own custom research and content marketing playbook, per the company.

The brand has hired former American Photo editor-in-chief and spirits journalist Scott Alexander to lead the site as editorial director.