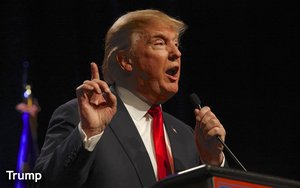 Donald Trump has reportedly been sending campaign fund-raising emails to foreign elected officials, according to a complaint filed before the Federal Election Commission (FEC) Wednesday.

It is also against campaign finance law to knowingly solicit donations from those who are foreigners.

It comes down to whether the campaign knowingly sent emails to foreign officials. Although the Trump campaign has not commented on the allegations, email list scrubbing should have been utilized.

"Donald Trump should have known better," states Paul Ryan, deputy executive director at Campaign Legal Center (CLC), in a statement. "It is a no-brainer that it violates the law to send fundraising emails to members of a foreign government on their official foreign government email accounts, and yet, that's exactly what Trump has done repeatedly."

The FEC complaint alleges that foreign diplomats from Britain, Australia, Canada, Iceland and Scotland have received fund-raising email solicitations from the Trump campaign.

As these email addresses would have included foreign email domain names, such as .uk and .ca, evidence points to lazy batch and blast email attempts.