Mobile Video To Hit $25B Globally In 5 Years

Worldwide revenue from mobile video will reach $25 billion by 2021, according to fresh research from Strategy Analytics.

The money is mostly coming from advertisers trying to reach a growing mobile-video audience.

“The strongest growth in mobile video revenue will come from advertising-funded content as advertisers look to catch up with the increasing quantity of video consumption,” Wei Shi, an analyst at Wireless Media Strategies, notes in the new report.

Over the next five years, ad spending on mobile video will grow at a 28% compound annual growth rate, Shi estimates.

The share of ad spend has increased dramatically over time. In 2010, advertising accounted for just 2% of worldwide mobile video revenue. That ballooned to 40% this year, and should swell to 66% by 2021, according to Strategy Analytics.

Inspiring this ad spend, the report also predicts that mobile-video viewers will more than double to 2 billion users by the end of 2022.

Among other responses, Twitter recently increased its allotted video upload length from 30 seconds to 140 seconds. In the near future,  when users encounter videos in their Twitter timeline, they will be able to click that video to launch “Watch Mode.” That's a separate section of the app featuring other videos they may like.

Separately, Facebook is dishing out around $50 million to coax top media publishers and celebs to use Facebook Live, while its Instagram unit recently debuted “Picked for You” channels, featuring videos grouped by users’ preferred topics and interests. 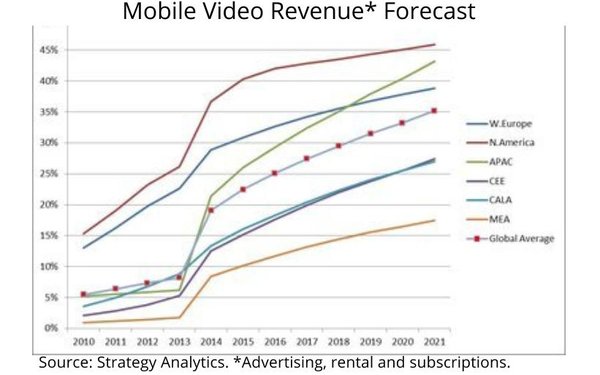