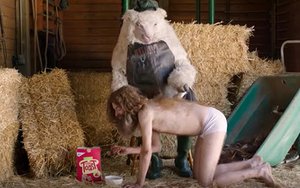 The campaign is also remarkable because it’s predominantly digital and mobile, to align with the demographic’s lifestyle.

The main creative consists of three 15-second videos designed for maximum consumption and sharing on Snapchat, Tumblr, Instagram and YouTube. In an understatement, General Mills itself describes the campaign, “Humans Can’t Resist,” as “admittedly weird.”

The core concept is that, just as other animals have foods they can’t resist — carrots for horses, cheese for mice, and so forth — humans can’t resist Tiny Toast.

The idea is conveyed by picturing a surreal world where animals tower over tiny humans, and the humans are so desperate to get a bowl of Tiny Toast they they’re willing to be shaved like a sheep, or eat out of a feed bag.

Other videos show a woman pressed up against window glass watching huge birds sitting at a table eating the cereal; and a tiny human stealing a box of the cereal from a huge seagull sitting on a boardwalk.

The campaign’s media approach reflects General Mills’ major shift in marketing strategy, as well as the target audience. While television still absorbs most of its marketing budget, the company has stated that fully 25% of the budget is being devoted to digital in its current fiscal year, up from 18% in fiscal 2015.