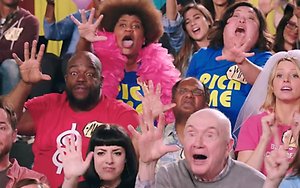 California Lottery is introducing its newest scratcher game based on The Price Is Right by incorporating the classic game show into its TV spots.

Developed with agency David&Goliath, the "Audience" 30-second spot features a customer faced with the task of choosing whether to purchase a $2, $5, or $10 game. He turns to a live studio audience similar to what people do during the real Price Is Right for help. In turn, the audience, dressed in their game show gear, all scream different suggestions in an attempt to influence his decision.

In addition, a series of 15-secondsocial videos shows coins "coming on down" in various scenarios, like rolling in a park while The Price Is Right theme song plays in the background."Not only were these coin contestants vital figures in U.S. history, they’re also terrific to use for scratching," says the agency.

The campaign runs in local California markets with TV, radio, out-of-home and social elements. There will also be unique spots airing on gas station TVs, where studio audiences will "chime in" at random moments when consumers least expect it.

These campaigns have been successful for the Lottery. During 2014-15, more than 443 million people viewed its ads, 10.5 million visitors saw its educational websites, and 5.88 million viewed its videos. The commission said in its report that its 319,156 Facebook Likes rank number one among all U.S. states and it also ranks as number one for YouTube and Twitter followers.

Last year, the California Lottery reported more than $5.5 billion in total sales during the fiscal year, the highest sales total in the state’s lottery history. This growth was fueled by sales of Scratchers tickets, which totaled $3.9 billion.