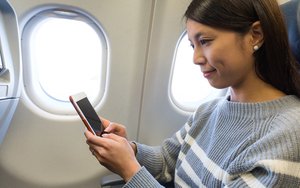 According to a survey of more than 1,000 U.S. consumers by Honeywell (which has its own in-flight connectivity product), nearly 75% are ready to switch airlines from their preferred carrier if a different one provided faster and more reliable WiFi. In fact, 21% of those consumers said they’ve already done so.

“WiFi is like a new kind of loyalty program,” Bill Kircos, vice president of marketing communications for Honeywell Aerospace, tells Marketing Daily. “You’re getting to the point where some things are being trumped by high-speed WiFi connectivity.”

Indeed, the availability of in-flight WiFi is beginning to affect how consumers choose their flights. More than two-thirds of consumers (68%) said its availability impacts how they book their flights, and 60% said they would feel disappointed to find a flight didn’t have the service.

Consumers are also growing more annoyed with their in-flight WiFi services. According to the survey, only 22% of consumers said their in-flight connection was extremely reliable, down from 27% who said the same in 2014. A significant number (84%) said it was important to have an experience identical to what they get in their home or office.

Not surprisingly, these numbers skew higher for Millennials, with nearly three-quarters saying in-flight WiFi availability impacts the flights they book, and more than a quarter (27%) have switched airlines to one with better in-flight connectivity.

“They’ve been born on the Web, and expect a certain experience,” Kircos says. “There’s an insatiable appetite to surf the web and connect to the Internet in the skies.”