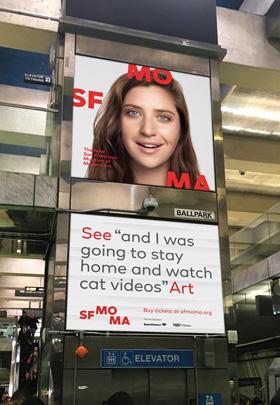 The new San Francisco Museum of Modern Art (SFMOMA) reopened its doors on May 14 after undergoing a $610 million makeover to double the museum's exhibition space, provide more free-to-the-public spaces, and expand its educational programs.

Now, the SFMOMA and its agency Chemistry Club are inviting people to visit its new digs with the "See Art" campaign appearing via out-of-home, digital, video, print and radio elements.

The work celebrates modern and contemporary art through museum-goers’ thoughts and expressions as they view the art, according to the agency. The creative breaks up the See and Art tagline with witty remarks. One ad appearing on bus stops, for instance, shows a multicultural Millennial-aged women with the message "See - blow my mind to pieces and put it back together - art." Another bus wrap ad features a middle-aged man under the message "See - I'm using brain cells I didn't even know I had - art."

The goal of the advertising campaign is to bring people and art closer together — and to do it in a way that is approachable and accessible to a wider audience.

"SFMOMA recognized that a lot of people in this area appreciate art, but don't feel museums are the best venues in which to enjoy it," says Scott Aal, partner, ECD, Chemistry Club. "They knew that in order to attract a less traditional crowd, they’d have to do something more fun/friendly than most museums do in their advertising.  Something that said, 'hey, maybe this is for me, too.'"

Additionally, the campaign is designed to communicate the interaction that takes place between the visitor and the art. "It’s not just the visitor standing there and staring at some inanimate object, it’s the visitor thinking about the work, and engaging with it in some way," says Aal. "That’s not an easy thing for a museum to communicate to its visitors, simply because they have such knowledge of and respect for the artist’s intent, and often times want to make it all about the intellectualism of art. So great credit to the SFMOMA people for allowing us to do something other than the expected."

This new expansion is projected to bump annual attendance from 600,000 to 900,000. SFMOMA has committed more media dollars to this Art campaign to make sure it will be seen, says Aal. "You always love to see a client putting their money where their mouth is—it was the highest compliment they could have paid us."