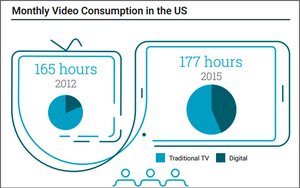 With monthly video consumption in the U.S. reaching 177 hours in 2015, up from 165 hours in 2012, per Google data released Thursday, consumer behavior not only advances technology it changes the way advertisers buy media.

It turns out programmatic media buys on YouTube continue to grow more than 55% month over month since becoming available through DBM in September 2015.

In the first quarter of 2016 on DBM, growth in spend targeting large screens outpaced all other player sizes combined by 17%. Large screens have been shown to have a positive correlation with key metrics such as brand lift, video viewability and engagement.

Viewers globally are transitioning from primetime to all the time, said Rany Ng, director of product management at Google. "With unlimited media choices, it is more critical for advertisers to ensure they are relevant and deliver great user experiences across devices," Ng said. "Programmatic video with the access to data, better audience signals, optimization and measurement has emerged as the leading strategy for brands to ensure they pair great creatives to the right viewers."

Programmatic video revenue for TV and media companies rose more than 550% on DFP in 2015, compared with the prior year, while video impressions on smartphones and tablets rose more than 30 times in 2015 on DBM.

For broadcasters and media companies, Google has seen more than 540% growth in programmatic mobile video impressions on DFP for smartphones and tablets in 2015, compared with the prior year. That growth for advertisers rose 33-times on smartphones and 32-times on tablets.

DBM-served video impressions on connected TVs for TV screens equipped with Internet access and Internet-enabled devices that plug into TVs, such as Chromecast and Roku, grew more than 225% in 2015, compared with 2014.