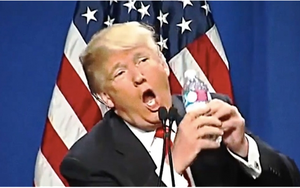 Goodby Silverstein & Partners (GS&P) is wading into the presidential election with a video that cautions against voting for Trump.

Created by Jeff Goodby and Rich Silverstein and agency audio engineer Nic Dematteo, "Our America" shows Trump acting unprofessional during a news conference as a way to convey how words have meaning and actions have consequences.

“We wanted to put Donald Trump’s antics in clear relief for all the world to see and remind them that our president is the leader of the free world, the person with a hand on the nuclear button,” says Jeff Goodby, Chairman, GS&P. “That person should not and cannot be Donald Trump. Just look at him."

The ad is shared across GS&P's social channels and the agency is "trying to give it to anyone who wants to use it,” says Rich Silverstein, Chairman, GS&P

This isn't the first time the agency has ventured into the political arena.

Over the years, GS&P and its founders have taken stands on issues they are passionate about. In 2012, Goodby and Silverstein created a controversial pro-Obama ad.

In 2013, GS&P created bribethesenate.com. The site popped up with a provocative proposal by suggesting the American public should out think the gun lobby and crowd-fund a little “financial persuasion” of their own. Gun control is a cause that 90% of Americans say they’re behind.

Then in 2014, GS&P introduced a campaign for Rock the Vote, titled #CareLikeCrazy, where the goal was to scare young people into voting.

This Trump spot, however, is not an agency project. "This was a personal project and in no way reflects any official political position taken by the agency,” says Silverstein.

"We want people to vote in November," he adds. "Our strategy is to present the criteria for being president, and then lay out a scenario that happened by someone who might become president. We’re saying now that you have the information, you decide."