With Snipers Making Headlines, USA Network Introduces A Series About A Sniper 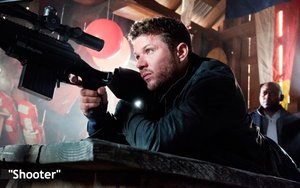 With the entire country in another one of its many paroxysms over gun violence and gun access, here comes USA Network with a drama series that raises the love of guns to fetishistic levels.

The show is called “Shooter” and it is adapted from the 2007 movie of the same name that starred Mark Wahlberg as a master sniper who is one of the world’s top experts in sophisticated high-powered weaponry and their uses in killing people.

Wahlberg is one of the producers behind this new series, which premieres Tuesday night on USA and stars Ryan Phillippe in the title role of the “Shooter,” aka Bob Lee Swagger. Yes, Swagger.

The original movie -- which airs frequently on Showtime, where I have caught just about all of it by now -- was a piece of implausible, nonsensical garbage full of macho posturing about righteousness, honor, resourcefulness and individual initiative.

The movie included at least one sequence in which Swagger took on seemingly hundreds of attackers and outfought them all -- like the player of a video game who “kills” each and every gun-wielding assailant who pops out from behind trees or fence posts.

Maybe USA Network’s new “Shooter” show will appeal to the video game-playing multitudes who fantasize about the power that wielding heavy armaments can bestow upon them.

But if this is the target audience (no pun intended), then this show would seem to be coming along at just the wrong time -- when our news headlines are all about “shooters” and their assault rifles, including the “shooter” in Dallas who used sniper techniques to kill five police officers.

More recently, just over this past weekend, a “shooter” described in news reports as a former Marine sergeant is the lead suspect in the killing of three law enforcement officers in Baton Rouge.

In the “Shooter” TV show, Swagger is also a Marine sergeant, now retired from a career in which he attained legendary status as a sniper in Afghanistan and Iraq.

In the show, as in the movie, he stands accused of being the perpetrator of a heinous crime that he did not commit. He will then use his sniping and hunting skills (in the show they’re positioned as kind of the same thing) to get revenge on those who framed him and clear his name.

Certainly, Swagger is clearly depicted here as a hero. No one will mistake him for the kind of real-life psychos that have made headlines lately. Still, guns and gun techniques are portrayed so reverently in this TV show that it comes across as inappropriate in this summer of violence.

In one sequence, Sgt. Swagger receives a high-tech rifle in the mail, shipped to him for investigative purposes by the Department of Homeland Security, which seeks his assessment of the weapon and the potential assailant who might be planning to use it in an attack on the President.

This sequence -- in which Swagger is seen unpacking the weapon, holding it and practically caressing it -- is accompanied by a song about sex. So while he’s unwrapping this gun parcel, you hear lyrics such as “Takin’ her clothes off it break my mind, takin’ her clothes off, gone take all mine …” and “Give me your love, baby, all the time.” The song is called “The River” and it is performed by Son Little.

If this sequence wasn’t so tasteless, it would be hilarious. Instead, this scene, along with the rest of this grim, sad, ill-timed TV show, marks “Shooter” as a show about a sniper that is way off-target.