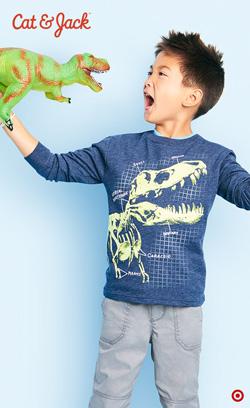 The Minneapolis-based retailer says that in order to create the seven-spot campaign, it worked with 826LA, a Los Angeles-based nonprofit focused on writing and tutoring, and Adolescent, a New York-based production collective that works with young directors. Target tapped a 13 year old, a 15 year old and a 17 year old to direct, with seven different children (from 8 to 11) writing scenarios that range from a friendship beginning over a Star Wars lunch box to a pencil sketch of an imaginary world.

Kids also illustrated the sets, with music from girl-band L2M. And a 15 year old acted as stylist. Kids’ designs are to be featured in stores, and they’ll have a hand in social media efforts, too. (Last year, it built its BTS effort around the hottest kids on YouTube.)

“This year, Target is approaching our marketing strategy differently to ensure we’re sharing information with parents when it’s most relevant to them based on their school start date,” a spokesperson says. "So national spots will run later than normal, running July 31 to Aug. 6, but we’ll run local spots earlier in markets with earlier start dates, starting July 17.”

While back-to-school is always a critical period for retailers, it’s especially so for Target, which has said it hopes to turn Cat & Jack, its new private-label clothing line for kids, into a billion-dollar business in its launch year. It’s also got high hopes for Pillowfort, its new private label home furnishings line for kids.

“Kids and families are incredibly important to Target, and just as parents recognize the potential in their kids, Target does too,” says CMO Jeff Jones, in the company’s announcement. “We were inspired to work even more closely with kids after seeing the difference they made in the development of our new Cat & Jack and Pillowfort lines. Now, we're taking things a step further, allowing kids to put their mark on Target’s community giving and marketing campaign for the back-to-school season."

The effort also includes a strong cause-marketing link, with a $5 million DonorsChoose.org effort that kicks off on Aug. 1, and runs through the fall. The company says to be eligible, ideas must be completely kid-inspired, not exceed $1,000, and somehow help kids get more physically active or eat healthier foods.