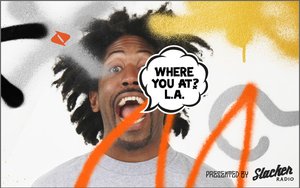 Boost Mobile and its agency 180/LA are teaming with rapper Murs for a live concert series that enables fans to interact with the California rapper. 180/LA devised the concept, strategy and is handling the execution.

The effort kicked off July 13 with fans streaming the "Where You At?" show live on Facebook and Twitter using Boost mobile phones. They were able to suggest interview questions or throw out a topic for freestyle performances.

There will be four more performances. I the final episode, which will air live on September 28, Murs will attempt to break the World Record for longest freestyle rap, which currently stands at just over 24 hours.

This project represents a shift for the music-centric prepaid mobile service.

In the past, Boost has done live performances, but never broadcasted them live.

"There's something special about bringing truly live entertainment to the world, and now with Facebook Live, it's not only possible to view the show in real-time but actually interact with the performers themselves, giving audiences an even closer, more direct connection to their favorite artists," says the agency.

Boost Mobile's message is to provide access and connection, especially where other brands impose restrictions and limitations. This program is another way we can generate connections - between artists, communities and fans.

Plus, in this particular execution, the whole show is live streaming through Boost phones and a Boost network, which any customer can go to the store and get. That's how confident the brand is in their offering: best technology and reliable service, they say.

The campaign lives largely via social media. The concerts are heavily promoted via Snapchat, Twitter, and Facebook. There will be "incremental" out-of-home advertising, says the agency.