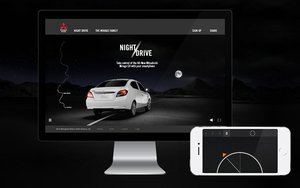 Mitsubishi Motors North America has released the interactive portion of its campaign that introduces the tech-loaded Mirage G4.

The effort, from the automaker’s lead agency 180LA, includes a dual-screen, interactive experience in which drivers use their phone and laptop together to test the 2017 Mitsubishi Mirage G4.

The Mitsubishi Mirage hatchback and Mirage G4 sedan are the first in its price class to offer Apple CarPlay support and Android Auto. The car, with a base price of $13,000, went on sale last month.

Mitsubishi is letting site visitors connect their smartphones to take control of the Mirage G4 on a mysterious and sleek midnight racing track.

After entering a unique URL, the user takes control of an interactive film, using intuitive kinetic gestures to move the car through various scenes. Features like the rearview camera, turning radius, Hill Start Assist and MPG are highlighted. At the conclusion, the driver is assigned a personality type (such as “Wallet Watcher,” “Learner’s Permit” or “Mirage Master”), and also gets a highlight reel of their performance in the form of a shareable GIF.

“We wanted to relook at the way feature demos are done,” says Karan Dang, digital creative director, 180/LA. “Since the cars come with full smartphone connectivity, it made sense to demo these features in an interactive second screen experience.”

The campaign’s target is a younger Millennial buyer who is attracted to the Mirage G4 not only for its price and low gas mileage, but technology like Apple CarPlay and Android Auto, he says.

“They are well researched and increasingly reliant on digital touchpoints to gather information,"  Dang says. "The Night Drive experience allows our audience to virtually experience the key features of the G4 prior to coming to the dealership.“

The effort aims to drive buyers’ consideration, he says.

“Mitsubishi has an incredible brand heritage, and is known for innovations in engineering and fuel efficiency,” Dang says. “While awareness of the Mitsubishi brand is strong, we are currently one of the smallest automotive brands in the U.S.”

The industry is seeing a dramatic rise in digital touch points throughout the automotive customer journey, and a decline in dealer visits.

“To help bridge the gap from awareness to consideration, experiences like Night Drive give auto buyers a chance to experience key features of the Mirage G4 prior to heading to the dealership,” Dang says.