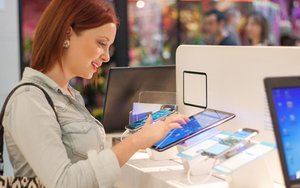 According to the Consumer Technology Association’s midyear forecast, revenues for technology products should reach $224 billion worldwide, an increase of 1.3% over last year. The market will be driven by broader adoption of the Internet of Things and other emerging technology.

“This is not necessarily a new story,” Shawn DuBravac, chief economist at the Consumer Technology Association, said in a Facebook Live session highlighting the report. “It’s always these new categories that push things forward.”

Although the five largest categories of the tech industry — smartphones, tablets, LCD televisions, laptops and desktops — will account for 51% of the sector’s overall revenues this year, that influence will begin to decline starting in 2017, he said.

“We expect next year, for the first time in several year, [those categories] will account for less than half of industry growth,” DuBravac said. (Despite the overall decline, some segments within those categories — such as 4K UHD TVs — will continue to show growth in the coming years.)

Some of that decline is accountable through the “digitization” of previously “analog” portions of consumers' lives, he said. He pointed to pet tech as a previously non-technology-based sector that is starting to see some tech encroachment. “What will define the industry in years to come is that we will digitize environments that weren’t [digital] before,” he said.

These emerging categories already account for much of the sector’s projected growth this year, as well, he said. Wearable sales are expected to increase 39% to reach nearly 48 million units, led by fitness trackers, whose growth is expected to increase 60% over 2015. Similarly, smart-home devices, drones and virtual reality gear are expected to grow 29%, 112% and 266%, respectively. “You have these ecosystems that are beginning to percolate with the industry and are fueling growth for the year,” DuBravac said.