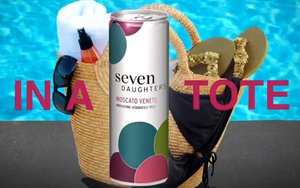 Seven Daughters and its agency Schafer Condon Carter are introducing the "Yes You Can" campaign to support the alcohol brand's first line of wine in a can.

The digital media initiative's strategy is working with several additional partners to amplify its reach in order to connect with millennial-aged woman at key moments.

Via Evite, the effort is reaching women who are hosting and attending gatherings that align with the Seven Daughters brand voice.

With programmatic partner, Yieldbot, the campaign reaches women based on real-time intent signals. "We like that she is very close to a purchase occasion as a host or guest," said the agency.

There is also a pre-roll video that shows the canned brand against a variety of backdrops and with accompanying text, which reads: “You can bring it on a boat, in a tote, on a hike, on a bike, to a show or anywhere you want to go.”

Tremor Video is using its resources to reach a highly targeted audience and magnify the message across all screens, including connected TV.  And a Facebook Canvas Ad includes this video content and expands the can campaign.

Lastly, influencer media kits have been distributed to 25 "highly followed" bloggers to inspire them to create messages using the cans, and the fun items included in the kits, such as product samples, a Moscato straw, Stenson hat, a branded towel and a white pail.