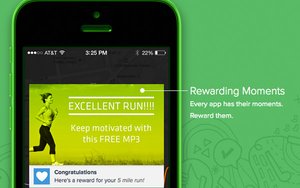 Brian Wong, Kiip’s CEO, says that the money will be used to position Kiip as the leader in moments marketing by exploring opportunities in the Asia Pacific region and by developing their data collection and analysis to understand consumers better.

“Marketers want to engage consumers in a more respectful way, and know more about their consumers,” says Wong.

Kiip works with brands like Coke, Taco Bell, Campari, and Clorox — brands that aren’t native to mobile. Wong says that Kiip’s style of moments marketing is much more about branding than it is about driving installs.

If a consumer is standing in a grocery store, Wong says they’re more likely to choose the brand that hasn’t bothered them, or has actually rewarded them.

Kiip’s revenue grew 230% in 2015 and is slated to double again this year. Brian Wong, Kiip’s CEO, says that with his company doubling in size again in 2016, Kiip is now close to breaking even.

“We aren’t oriented toward being acquired,” says Wong, referring to the consolidation seen in some areas of the market this year.

Wong says that Kiip’s offering is differentiated enough to keep existing investors interested and to attract new ones.