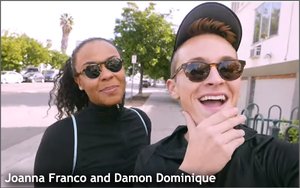 Authenticity goes a long way. Just ask Joanna Franco, co-creator of "Shut Up and Go." She moved to Los Angeles from Brazil by way of New York. Now she supports brands like AT&T by co-hosting a YouTube travel channel with co-creator Damon, feeding content to nearly 415,000 subscribers.

Brands want to find that "authentic" influencer, but it's just as difficult for influencers to grow an authentic audience, Franco told MediaPost's OMMA LA attendees during a panel discussion Tuesday.

A strong strategy means making a campaign with longevity, not just a one-off video, Franco said. "It's not worth diluting an audience," she said. "Make it a series."

In a separate discussion, Franco told Media Daily News that one 30-second shout-out from a YouTube influencer with 1 million subscribers can bring in between $40,000 and $100,000, but the value for the audience, brand and influencer resides in long-term relationships.

A shout-out may seem like a quick way to gain buzz, but it's not long lasting, said Tyler Starrine, associate strategy director at Huge. "The more transparent you can be about the relationship, the better it will be."

Longer-term relationships will become the norm, but this requires the resources to support the terms of the contract, Franco said.

Influencers can gain revenue from generic ads like TrueView across YouTube, but there are a variety of ways to bring in revenue. Non-skippable ads generate more revenue around Christmas, compared with January, as long as video posts keep flowing.

While the bigger money comes from sponsorships, brands will pay for the influencer's image and voice, Instagram posts and Twitter tweets.