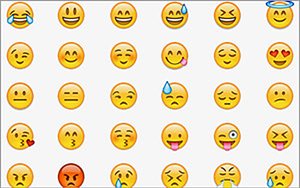 Snapchat unveiled a new emoji-creating feature on its social media application Tuesday, a result of its March acquisition of Bitstrips for $100 million.

Bitstrips is the startup behind Bitmoji, an application that allows users to create customized emojis, or cartoon characters based on human likenesses. Snapchat users can now sync their Bitstrips accounts to access any previously made avatar on Snpachat, and a new "Friendmoji" feature allows Snapchat users to create cartoon likenesses of their friends and social media followers.

A picture is worth a thousand words and emojis are a popular method to express emotional reactions quickly, such as a happy face or sad face in response to social content or life events. More than 110 billion emojis have been tweeted since 2014, according to Twitter, and Facebook recently added emoji reactions to its news feed this year.

This past Sunday marked the third annual World Emoji Day.

Digital marketing campaigns containing emojis have increased 557% over the last 12 months, according to a recent study by AppBoy.

Open rates on emails with emojis in the subject lines have increased by an average of 15% year-over-year, according to Appboy, but the company found that emojis have no influence on click-through rates.

This means consumers may be more likely to open an email containing an emoji in the subject line, but marketers are failing to capitalize on that engagement by enticing subscribers to click on a link in the email driving customers to a sale.

The success of emojis in email marketing may also correspond to a subscriber’s age. People ages 25 to 44 are more open to emoji messages in texts, according to an Appboy poll of 500 consumers, but customers aged 45 or more are more likely to engage with emails containing emojis.