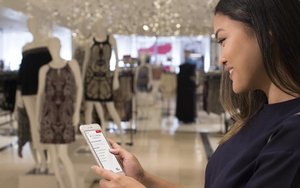 Add Macy’s to the list of retailers using artificial intelligence as a way to win over customers, joining brands like the North Face and Lowe’s.

Dubbed “Macy’s On Call,” the new communications platform uses IBM Watson’s cognitive technology in an in-store mobile companion, and is testing in 10 stores nationwide. The app uses Watson via Satisfi, an intelligent engagement platform, and allows shoppers to type in natural-language questions like “where are women’s shoes?” Right now, it’s in English, although the version in the Miami location is also testing Spanish.

The idea, Macy’s says, is that the system will continue to evolve as it learns more about customers in each store location.

Macy’s is hardly the first retailer to use AI, which has been around since the 1950s. But it is one of the most mainstream brands to do so, and having it function on the shopper’s own mobile device is a different twist. It’s also an interesting effort from Macy’s, which has vowed to find ways to regain relevance with Millennials. And it’s an example of stores trying to figure out new ways to incorporate digital shopping experiences into brick-and-mortar structures.

“This program … will help us explore new ways to engage one-on-one with customers in-store, providing them another level of service right at their fingertips,” says Peter Sachse, Macy’s chief growth officer, in its announcement. “Bringing Watson into a retail store setting presents an opportunity to engage with the consumer on a variety of levels.”

In 2014, Lowe’s began experimenting with OSHbots, which roam the store answering simple questions about product availability and location for customers, freeing human associates up to answer more in-depth queries. And last year, the North Face and IBM Watson introduced a new shopping experience, using personal shopping software from Fluid that asks users a series of questions about what they will be doing outdoors, how cold it will be and what features they would like, before generating a list of suggestions.

Users access Macy’s On Call via macys.com/storehelp, and in addition to getting help navigating the store (and finding restrooms), also get information about in-store services, including My Stylist@Macy’s personal shoppers, and Buy Online, Pickup in Store counters.