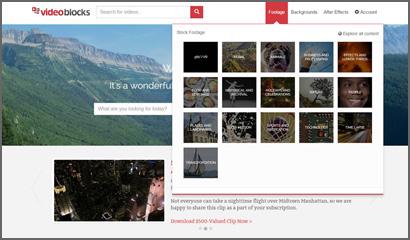 Up until now, VideoBlocks was a stock image house that aimed itself at the “creative class” of video creators that were often really people who did something else for their real living.

For a price that started with a $99 a year VideoBlocks membership fee, these people--who make YouTube videos, indie movies, organizational/promotional videos  and the like--had a way to get their hands on top-notch stock footage without paying larger bucks to “professional” stock photo/video firms.

Instead of paying piece-by-piece, members pay a low fee once a year and get to go through the video buffet line as many times as they want. VideoBlocks claims a library of $10 million worth of video assets.

That worked just fine and in fact, made VideoBlocks one of the fastest-growing media companies in the United States, according to Inc. magazine. It also helped it grow ancillary businesses GraphicStock and AudioBlocks with it.

Its simplicity--and fairness to its clip art contributors who get a 100% commission deal from VideoBlocks--has let the company grow to 150,000 subscribers in just a couple years.

Now it’s announcing its new Enterprise endeavor, pitching big-business users, including an asset management system that lets a customer manage its assembled video and audio clips in one place and share the process with employees and collaborators company-wide.

Enterprise customers also get their own VideoBlocks account manager and priority support to personalize the service.

For VideoBlocks, no doubt, this is its biggest, most frontal attack on the established clip places, like Shutterstock and Getty.

“This puts us up against the big dogs,” says Joel Holland, the founder. “We built this because of demand” from big users.  Those now include NBC, MTV and Discovery.

But perhaps the showiest of them is BuzzFeed which has become something like VideoBlocks Enterprise’s guinea pig.

Its new Enterprise link connects 200 BuzzFeed employees who are turning out the steady stream of video who can now work together, wherever they are, and keep track of what’s happening where.

VideoBlocks has been working to to make school-wide deals that would let students and faculty tap into VideoBlocks’ library of video, graphic and audio clips. Ohio State University and Stanford are on board; so is the for-profit Art Institutes network of schools. (No small side benefit: VideoBlocks hopes to become a part of creators' lives, starting early on.)

Holland's benchmark is even more straightforward: He thinks VideoBlocks should be a tool used by everybody who’s already using the Adobe Creative Cloud, the software service that gives users access to a collection of Adobe graphic, video, photo editing and cloud services. That’s a market of millions.

For any company with more than five users, Holland says, the financial advantage of making what amounts to a package deal for Enterprise with IP authenticating  benefits, should be a no-brainer. “It’s safe to say companies could save 75% or or more,” says Holland. “BuzzFeed wil access millions of dollars’ worth of clips and I can tell you, they aren’t paying millions of dollars.”