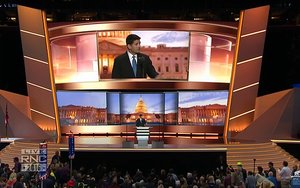 For the second night of coverage, Fox led in the three-hour prime-time coverage -- posting a Nielsen 4.8 million viewers with CNN at 2.8 million and MSNBC at 1.5 million.

For the broadcasters during the 10 p.m. hour, NBC was tops at 4.7 million viewers followed by CBS at 2.5 million; and ABC with 2.3 million. Still, Fox News beat all networks -- cable or broadcast -- in that hour for all viewers, averaging 5.3 million. CNN was in third place with 3.1 million viewers.