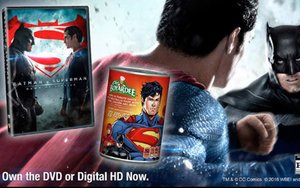 The products use the brand’s basic ingredients, but the pastas have custom shapes tied to DC super heroes — such as the “S” logo used by Superman and Supergirl — as well as labeling that features those and other DC “Justice League” characters.

ConAgra is projecting incremental sales of about 30% for the brand during the term of the initial multi-year licensing agreement, according to Jennifer Kozmic, senior brand manager, Chef Boyardee. She declined to specify the term length, but said the companies may extend the deal depending on its results.

The products, which began to hit shelves in major grocery retailers this month, is being supported with shopper marketing and in-store display programs with retail partners, including Wal-Mart and Kroger.

They are currently being promoted through an exclusive tie-in offer with Kroger: Buy a DVD of 2016’s “Batman V. Superman: Dawn of Justice” movie at Kroger, and get a free can of Chef Boyardee. The offer is now featured on Chef Boyardee’s Facebook (above) and Twitter channels.

Retail promotions for the new products will ramp up for the back-to-school period, and some paid Facebook advertising will be seen in the coming months.

The multi-year licensing agreement with DC Comics is Chef Boyardee’s first since ConAgra acquired it as part of its $2 billion purchase of International Home Foods, Inc. in 2000.

However, the licensing strategy has an established track record. ConAgra teamed with DC Comics on a similar deal for a Justice League Swiss Miss Hot Cocoa Mix product in 2002. And under its previous owner, Chef Boyardee produced co-branded pastas with Pac-Man in the 1980’s, and with Marvel’s X-Men in the 1990’s.

Like many legacy brands from major food companies, Chef Boyardee, one of ConAgra’s largest brands, has seen dollar sales suffer in recent years as Millennials in particular have turned away from processed foods.

In 2014, ConAgra executives cited Chef Boyardee in particular as contributing to the company’s continuing profit challenges and volume declines for its consumer CPG brands. Then-CEO Gary Rodkin told analysts that the company had spent too much money trying to win Millennials over to Boyardee, Orville Redenbacher’s and Healthy Choice, signaling a renewed focus on marketing to the brands’ core customers going forward. Rodkin retired and was succeeded by Sean Connolly in April 2015.

For its fiscal 2016 fourth quarter, ended May 29, ConAgra’s consumer foods segment saw sales decline 5% when adjusted for an extra week in the comparable year-ago period, reflecting a 4% volume decrease, flat price/mix, and a negative 1% impact from foreign exchange.

The company said it increased advertising and promotion spending by 12% during the fiscal year, including 8% in the fourth quarter, using “a much more rigorous and targeted approach to allocating these dollars against brands where we can drive the greatest margin impact,” including Reddi-wip, Marie Callender’s, Pam, Bertolli, Slim Jim and Hunt's.

“On volume in particular, the bottom line is this: it is an undeniable fact that our past promotional practices have embedded in our volume base, a group of consumers who are not brand loyal, who only buy on hot deals, and who contribute virtually nothing to our profitability,” said Connolly. “It's also true that by catering to them, we have underserved the bulk of our volume base and these are consumers who would be willing to pay more for more contemporary, higher-quality offerings. The good news here is that around this whole dynamic, it is reversible if we are willing to stick to our principles around optimizing mix, and also refreshing the targeted brands for a new day.”

Chef Boyardee was not among the brands cited as having seen dollar sales growth during the fourth quarter, and the company reported a 7-cents-per-diluted-share earnings impact from intangible impairment charges for the Boyardee brand.

She attributes the volume growth in large part to in-store and shopper marketing initiatives through partnerships with key retailers, supported by social media.

In addition, since this past January, the brand has been promoting its “no artificial flavors, colors or preservatives” message on its labels and through social media.