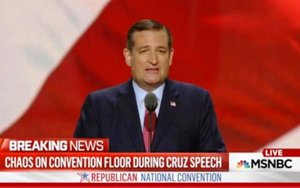 The chaos and evident disunity between GOP party factions that erupted into plain view on Wednesday night was probably something the party apparatus would have preferred to remain under wraps.

But for those of us watching at home, the drama surrounding Ted Cruz’s speech was a moment tailor-made for TV.

It was the first time in three days that I felt the need to turn to a news channel for an explanation by the talking heads of what just happened. That’s because I do most of my convention watching on C-Span. I have always loved C-Span for its unfiltered coverage of events.

During political conventions, for example, C-Span simply aims its cameras at the speechmakers and their audience, and viewers get to take it all in unfettered by cutaways and split screens showing commentators explaining what a speechmaker just said or, in many cases, ignoring the oratory altogether.

But as I watched Cruz deliver his speech Wednesday night and began to detect the groundswell of boos and catcalls emanating from the arena audience, I actually needed someone to explain this to me.

So I turned to CNN, where I found Wolf Blitzer and Jake Tapper in split-screen mode -- they on one side and Cruz on the other -- explaining how the boos began when the audience realized Cruz was entering the home stretch of his speech and it was becoming apparent that he would not be issuing a clear endorsement of the Republican nominee.

On one level, this was hardly surprising. Trump had mauled Cruz so badly during the primaries and televised debates with his insults and name-calling that it was hard to understand why Cruz even came to Cleveland in the first place.

But once there, it was also surprising that he would fall short of endorsing the nominee. On the other hand, maybe Cruz himself felt his speech represented a compromise on his part: Support the party, but follow his conscience in deciding against gushing about the nominee.

Whatever the case, the images of Cruz getting booed, juxtaposed on the same screen with Trump making an entrance that seemed choreographed to upstage Cruz, made for great TV. It felt like actual news that, for a change, even justified the news channels’ use of the words “Breaking news” which they all post on-screen virtually all the time, whether there is real “breaking news” or not.

The Cruz drama seemed to upstage the subsequent speech by Trump’s vice presidential pick, Mike Pence, governor of Indiana. His speech was fine, but compared to the tumult that preceded it, the speech was anti-climactic. That was not the intention, of course. The speeches traditionally delivered by vice presidential nominees on the second-to-last night of a political convention are supposed to be the evening’s high point. That was not the case for Pence.

And now, the stage is set for the fourth and final night and the acceptance speech we’ve all been waiting for: Trump’s. Will he actually recite a written speech? Or will he go off-script and adopt the same off-the-cuff, devil-may-care approach that played so well during the primaries and got him to this point, where he’s the Republican nominee for President of the United States?

What he should do is deliver a great speech, one written with great care, in which he articulates an optimistic vision for America’s future and outlines how he intends to bring people together and heal our divisions. After three nights of watching multiple Republican speakers on TV all attacking Hillary Clinton, the point is made: The GOP thinks electing her would be a disaster for America.

OK, we get why we shouldn’t vote for her. What we don’t get yet is this: Why should we vote for Trump? Tonight, starting at around 10 p.m. Eastern, he’ll have about an hour of prime-time TV all to himself to make his case.