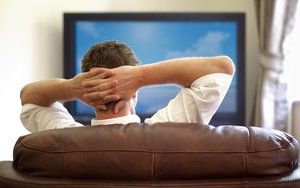 Total broadcast and cable network non-kids C3 ratings sank about 2% in prime time for adults 18-49 audiences during the second quarter.

Todd Juenger, senior research analyst of Bernstein Research, writes the incremental audience for cable news came from viewers who would not be watching TV at all, as well as taking share from other TV networks.

Other factors for cable’s gains include: The addition of the high-rated NCAA Basketball Championship on Turner; and AMC’s “Walking Dead”/”Fear The Walking Dead” programming.

Broadcast networks took a hit in part because of general shifting viewership to cable networks, say Bernstein Research -- including the NCAA Championship which aired on CBS a year ago in the second quarter. CBS was down 13% in C3 data during the period.

That said, Bernstein noted, broadcasters benefited in the period from Fox’s high rated “Empire” series which started up new episodes in the second quarter 2016 versus the previous year where it debuted in the first quarter 2015. Fox was 2% higher in C3 in the just completed second quarter.

ABC was down 8% in C3 ratings -- although improving from its 16% decline in the first quarter. ABC did make some gains from highly rated NBA Finals games. NBC lost 4% as a result of declines for its returning shows. It did have positive results from new reality show “Little Big Shots.”

Going in the other direction, Discovery Communications sank 7% while Disney’s cable networks gave up 10%, with NBCUniversal also sinking 10%. NBC’s Syfy network dropped 35% in the quarter. E! Lost 20%, and Bravo was down 8%.

Kids cable networks in total day viewing for those 2-11 viewers was up 2% -- mostly attributable to Nick Jr. (109% gain) with Nickelodeon itself inching up 1%. Disney XD lost 16%; Cartoon Network was down 22%.