Samsung Gears Up For Olympic Games 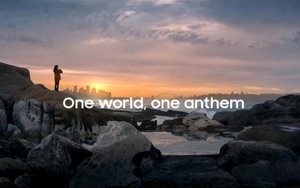 Longtime sponsor of the Olympic games Samsung wants to make the competition less about who wins and more about bringing people and countries together in the name of sport.

"Samsung is a company that started from humble origins that grew and thrived from taking risks and fighting against challenges,” Sophia Kim, global PR director for Samsung, tells Marketing Daily. “We are using the Olympic Games as a platform to talk about Samsung’s brand value system and showcase to the world Samsung’s story from a much more human standpoint, aligned with our brand value of progress coming from defying barriers.”

In an overarching spot highlighting this theme, the Korean electronics company ties together various nations’ anthems into one coherent song. The spot begins with a girl singing the Botswana national anthem into her Galaxy smartphone. That phone travels all over the world, capturing the voices of athletes (including U.K. Diver Tom Daley, U.S. track & field competitor Alysia Montano, French Paralympian Arnaud Assoumani and South Sudan track and field athlete Margret Rumat Rumat) and fans singing lines of their own national anthems, blending them all into one song.

“[The spot] attempts to break down barriers of geographic borders and strives to unite the world through one anthem made from many, brought to life by athletes and fans around the world,” Kim says. “Each excerpt from the anthems chosen were carefully selected so when combined together, this new unifying anthem represents global unity and celebrates collective progress, which is integral to the spirit of the Olympic Games.”

The spot continues the themes laid out in Samsung’s previously released Olympic marketing efforts, which have included a short documentary film chronicling the lives of Olympic hopefuls, and a spot showcasing how Samsung devices help athletes stay connected as they train far from home.

“Our ads and content focus on people/athletes who in one way or another have chosen to defy barriers, whether economic, social or geographic,” Kim says. “They focus on athletes who have faced barriers and defied perceptions of what an athlete should or shouldn’t be.”

Included among those efforts will be digital and social content featuring the athletes spotlighted in the television commercial, telling their personal stories of defying barriers and overcoming obstacles, according to the company.

In addition to the advertising campaign, Samsung has agreed to provide more than 12,500 Galaxy smartphones to Olympic athletes to help them “capture, communicate and share information more easily and conveniently,” Kim says. The company will also have an installation within the Olympic Park in Rio and an app that will provide Olympic and Paralympic news and updates.

“Samsung will also have a social presence as the Olympic Games unfold, which will continue the defying barriers thematic,” Kim says.