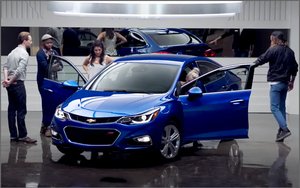 A new tongue-in-cheek spot from General Motors for the Chevrolet Cruze shows there’s more to the target Millennial market than what meets the eye.

Created by Commonwealth//McCann, the online video continues Chevy’s “Real People, Not Actors” concept. “Stereotypes” places a diverse group of real-life Millennials in a focus group situation, where they believe they are being asked for their opinions on a new ad aimed at them.

As they see proposed ideas for the ad — impromptu beach party, rad breakdancing competition, sparklers — they respond with disbelief, laughter and exasperation.

Ultimately, the 2016 Chevrolet Cruze is revealed, and the group’s honest, unscripted (and impressed) reactions prove the point: They don’t want an ad that’s made for them. They want a car that’s built for them.

“Our current campaign effectively runs the gamut from serious to humorous; and sometimes, irreverence thrown in to capture attention,” says Mary Kubitskey, Chevrolet senior advertising and marketing manager. “We believe ‘Stereotypes’ does just that. In a culture that finds it so easy to make fun of Millennials, we’d like them to know that Chevy understands and respects them.”

Millennials are a difficult group to reach with a traditional media strategy as they typically don’t consume media like generations before them, she says.

“Our media plan encompasses a wide variety of not just media partners, but media channels and first-ever integrations,” Kubitskey says. “Cruze media can be found in all the usual places; but also in some new and unexpected places as well. And, of course, like ‘Stereotypes,’ we need to have creative that speaks to them in an engaging way.”

The compact car is in the same segment as the Honda Civic, Toyota Corolla, Ford Focus and Hyundai Elantra. Cruze is Chevy’s passenger car volume leader and thus has several targets including first-time new car buyers as well as older, more traditional buyers, and everyone in between.

“Loyal consumers and conquest consumers love the new Cruze,” Kubitskey says. “In fact, our early buyer data tells us that the all-new Cruze is Chevy’s leader in conquesting (behind Volt, of course).”