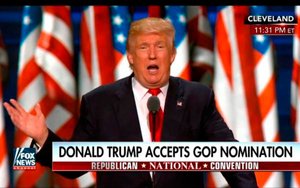 You can’t always get what you want, as the Stones sang, and that was the case Thursday night if you were seeking eloquence in speech-making.

In TV interviews conducted on the floor of the Quicken Loans Arena after the speech, the party faithful declared themselves to be more than satisfied with the speech and their party’s nominee. Their reactions were a no-brainer. Anyone dedicated enough to have sat through this convention in person until the end of the final day had already demonstrated his or her devotion to the Trump cause.

But for anyone watching at home who was expecting Donald Trump to make speech-making great again, the speech was a big disappointment. It seemingly went on forever (75 minutes or thereabouts), and he delivered it in the same angry, graceless way he has been addressing his audiences for more than a year now.

This happens to be the style that won him so many primaries and eventually the nomination, so it might be unrealistic to have expected him to shift gears now. But if his speech thrilled the convention attendees inside the Cleveland arena, then that’s because he was preaching to the choir.

Many of us were hoping for a speech aimed at the tens of millions watching at home who had not yet made up their minds about Trump, and perhaps more to the point, have been inclined to dismiss him (and either vote for Hillary or not vote at all).

For the purposes of bringing more people into the tent, it was reasonable to expect some sort of a shift in the Trump style -- perhaps a speech that was less vitriolic and more optimistic in tone (while still hitting on his main points). Instead, the speech was charmless.

Many people can remember the way Ronald Reagan envisioned America as a “shining city upon a hill,” even though most of them probably cannot identify the speech in which he used the phrase, nor the context in which he placed it. We simply remember it as a phrase that sums up Reagan and his infectious optimism.

What phrase are we associating with Trump the candidate? “Build a wall”? “Make better trade deals”? At one point, Trump faced the camera and declared, “I am the law and order candidate!” You got the feeling this was the one phrase he uttered all night that he really wanted to stick.

Generally speaking, though, while listening to the way he delivered his acceptance speech last night, it reminded me of the way Ralph Kramden nervously recited the ad copy for that Handy Housewife Helper utensil he wanted to sell on TV in the “Chef of the Future” episode of “The Honeymooners.” Both Ralph and Donald had this stilted way of putting an emphasis on every single word.

No one can rightfully accuse Donald Trump of being nervous when appearing in public, but in making his pitch to America Thursday night, he came across as aloof, above-it-all, and imperious. It would be nice if he could rid himself of the habit of jutting his upraised chin into the air like he’s Mussolini, too.

When the speech was finally over, this climactic moment seemed underdone. Balloons began falling from the arena’s rafters, but it seemed as if there was a delay in producing the dramatic cascade of falling balloons that the moment called for. The balloons and confetti eventually fell so thickly that they partially obscured the scene being captured by TV cameras.

As Trump’s extended family joined him on stage, along with the family of vice presidential nominee Mike Pence, the group seemed to lack enthusiasm. Most notable was the absence of waving. We are accustomed to seeing these nominees and their families waving and smiling happily at their audiences, but for some reason, this staple of televised political stagecraft was missing from the proceedings Thursday night.

The scene was accompanied by the playing of “All Right Now,” the 1970 hit by the band called Free. It seemed an incongruous choice, although you might have concluded that it was chosen for its title -- that everything would be “alright” now that Trump has been nominated for president.

The next song was even more puzzling -- “You Can’t Always Get What You Want,” the Rolling Stones song. If the title of this song was supposed to suggest that as voters we can’t always get what we want, then the point was made, loud and clear.