The End Of Advertising, As We Know It

Eighty-eight percent of Fortune 500 companies that were around in 1955 no longer exist today.

Industries get disrupted. How’s that working out for advertising?

Until relatively recently, the ad industry has been dominated by the same media that dominated it in 1955: print, radio and TV. Only TV still dominates today, but its grip on media buyers is slipping. It’s hanging on by its fingernails.

What sort of hubris drove an iconic brand’s demise? Let’s start with the business it was in. You could say film, because that’s where it earned most of its revenues. But  the reality is that Kodak was in the business of storing personal memories. As technology disrupted the way people do that, Kodak failed to adapt its business model and now is just a memory.

Digitalization enabled people to store their memories in solid-state. The photographic film industry failed to react, deceiving itself that the technology was not scalable. That the relatively low storage capacity of early computer memory was so small that it was not a threat. Who would want to spend 23 seconds to store a 0.01-mpixel black-and-white image?

We all know what happened. Thanks to Moore’s Law, capacity jumped exponentially and the technology became disruptive. People stopped buying film and began saving their personal memories as 1s and 0s stored on digital media.

Ultimately, the smartphone integrated all the technology into a single mobile device, effectively completing the mass market destruction of film. 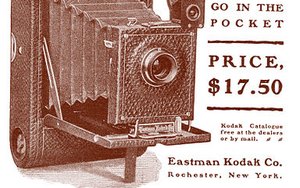 So what has all this got to do with advertising?

Media-buying began to digitize in 2008, as advertisements started to be placed by technology across a broad set of media platforms.

Like the film industry before it, the media industry deceived itself, believing digital would never be important as a percentage of total marketing spending and TV has always ruled, because it was where marketers could reach the most people. But that changed as people gained access to more data capacity and began using smartphones, tablets and other devices to consume media content, making it effective for marketers to reach them via media on those devices.

This drove new ways of buying and selling ads through software and the traditional people-based media-buying process began to dematerialize and the marketplace became democratized.

Any person, anywhere in the world, can buy media for any country through a PC-based terminal.

What does this mean in terms of how corporations manage their media buys and the implications for the industry?

Until fairly recently, media-buying was country-dependent. Each market had its own needs for print, radio and TV, and global marketers utilized a distributed model for buying media that involved lots of people and cumbersome processes.

Sixty percent or more of digital media is aggregated this way, per eMarketer, May 2016, creating a potential for uniform aggregated buying points.

What happens when all buying is possible via a single point?

Why do corporations still atomize media buying across countries or even brands?

Economies of scale would dictate that adding more work to fixed contact point(s) is the way forward. This is a cataclysmic change in how digital media can be transacted, leading to significant change in how media will be bought.

I see the rise of a global media hub, like a stock exchange, which will become responsible for transacting all digital programmatic buys. And if budgets are of a sufficient size, then pan-continental hubs will emerge covering APAC, EMEA and the Americas. This ultimately can be driven by a workflow process capturing budget, creative, target audience, timing and metrics.

Corporations have the opportunity to drive this to an in-house process, outsource to the new specialist shops forming, or transform current agency buying practices and thus transform today’s model.

It is, in essence, the marketing renaissance period. We have been living in a disruptive ad model for more than 40 years, and have been increasingly ignorant of what advertising has become. The fact is that a vast majority of advertising is increasingly being ignored.

Today’s new model of advertising is to create targeted, contextually relevant content for an increasingly personal device world. We have a new model developing, where data is driving a new creative requirement process across global, local and niche audiences.

So the massive scale and automation that a central buy unit can provide will still need local content, creative and programs to drive the engine. The local agency and/or brand involvement doesn’t die -- it morphs to an overall planning, strategy and creative excellence role, all backed by results and data driven from a highly efficient and knowledgeable team and systems specializing in global media properties.

Thus, we see the rise of a marketing renaissance where creative excellence excels, media moves to an operational model grounded in results and away from a bulk volume discount model that is more akin to a banking system. Driving more efficiency in the media process could drive more money back into the creative process to allow fulfillment of more personalized, targeted marketing .

What is causing the inertia that stops this from happening?

1 - CEOs of large corporations still have not realized that the common global IT elements found in expense systems, HR systems, and travel systems are increasingly possible with media buying. There is no reason for all of the company to not use the same media-buying systems, globally forming an IT stack for marketing. It is essential that brand marketers control their software stack driving their business by owning the contracts.

2 - Historical control of media to a country level with brand managers and local marketing managers creates decision-making that is disaggregated. The massive strategic changes needed will not be decided by a babble of voices globally. When coal mines are closed and automobile factories are shut down, the local workers are not asked whether things can be changed to drive a strategic opportunity. CEOs of major corporations must drive the transformation.

3 - Agencies have little interest in revolutionizing a corporate business process. Inertia abounds when industries pass through the 6D.

4 - There are still many people running significant brand budgets who don’t understand the field they are playing in and are driven by reach and frequency metrics only. Do you really need the 1.4 billion campaign impressions in a 250 million population, when you are targeting a subsegment of this large population? Waste abounds.

6 - Lack of understanding of the daisy chain in costs from brand to publisher with the focus on continuing the current agency cost structure rather than revolutionary process change.

7 - Media-planning structures built on how many meetings were conducted with whom in the prior quarter and continuing the vendor testing mantra rather than data and creative testing in consistent tech media buy systems.

What Next For Brands: A New Model

What is needed is pioneers and leaders in major corporations to speak out and drive the change to an industry process that has long been dated but now has the ability to be transformed by technology and organizational change.

Brand leaders need to have the CEOs of corporations champion the change, in the same manner that supply-chain economics drive product cost and go-to-market processes which the CEO is intrinsically a part of. The same should apply to media buying for marketing. All elements of the cost chain should be understood and optimized to drive the maximum efficiency for the creatives that are overlaid to the execution process.

I have been asked what the brands and CEOs get out of this change, as it involves some degree of centralized model. Clearly, the company benefits from lower go-to-market cost. Brands benefit from experts in media and data analysis aligned to the creatives, which are driven by the product, country and brand teams. In essence, it becomes an insight-driven model that is aligned to a customer journey.

However, ultimately not everyone can be asked for change. Major change is not usually by consensus. The coal industry and the automobile industry experienced radical change as they were forced into it by government or business leaders. It’s not the people at the coalface that will change their own industry -- it’s the executive leaders.

So what are you going to do about it?

advertising, media buying
15 comments about "The End Of Advertising, As We Know It".
Check to receive email when comments are posted.
Read more comments >
Next story loading