Syfy Gets Some Help Promoting Its New 'Sharknado' Movie 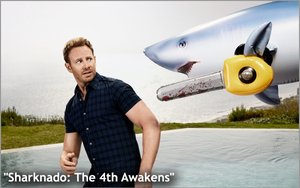 Dear Syfy: Please feel free to use any of the following quotes in any of your ads for “Sharknado: The 4th Awakens” (premiering this Sunday). Just please spell my name right: Adam Buckman, MediaPost.com. Thank you.

“Get ready for the Las Vegas shark attack movie of the year!”

“The critics agree: It’s on this weekend!”

“Warning! Some of what you’ll see in ‘Sharknado’ might seem implausible!”

“The sharknado threat: Could it happen here? The scientific community agrees: Anything’s possible!"

“Filmed on a location!”

“It’s Ian Ziering and Tara Reid as you’ve seen them before (in all three previous “Sharknado” movies)!”

“Ian Ziering is in the picture!” (… the one accompanying this blog, that is.)

“Wayne Newton, Carrot Top, Dr. Drew, Adrian Zmed, Vince Neil, a blonde who might be Debbie Gibson -- they’re all in it!”

“A weather-phenomenon like no other -- ‘Sharknado’ and Al Roker, playing himself!”

“Cheryl Tiegs plays a grandmother! When did this happen?!”

“Just when you thought it was safe to go back to the desert … it’s ‘Sharknado’!”

“Just when you thought it was safe to turn on your TV … it’s David Hasselhoff!”

“Remember the ‘Airplane’ movies? ‘Sharknado’ is like them, only it’s about sharks in the air, not planes!”

“Happy Fourth … fourth ‘Sharknado,’ that is!”

"'Sharknado': Sink your teeth into it!"

“Rated I, for Immature Audiences Only.”

“Got nothing better to do? Watch ‘Sharknado,’ coming this Sunday on Syfy!”