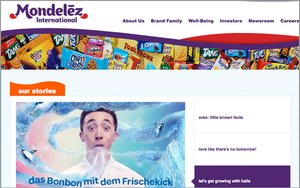 Mondelez, whose brands include Nabisco, Oreo, Chips Ahoy!, Cadbury, Belvita, and Dentyne, says the partnership will center around new ad formats on new screens, all aimed at creating content.

One of initial parts of the deal will include branded content around a live event to air on Fox on July 30th, called "Heaven Sent," featuring skydiver Luke Aikins jumping from 25,000 feet with no parachute. It will be re-broadcast on National Geographic on Sunday, July 31.

Fox says this builds on Mondelez brand campaigns with Hulu.

21st Century Fox is one of three owners of Hulu along with Walt Disney and Comcast. Mondelez brands in the Hulu deal -- Swedish Fish, Halls, and Ritz -- offered uninterrupted viewing with interactive messages before some Fox-owned shows.

These deals stem via Fox’s true[X] technology, which Fox bought in 2014. Joe Marchese, true[x] founder/CEO, now president of Fox Advanced Ad Products, stated: “Our mission is the same as it’s always been: perfect the right ad system to create the future of the commercial in a VOD world.”