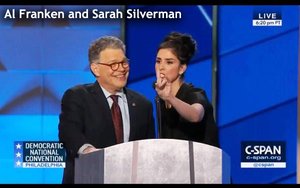 Somewhere between the Al Franken, Sarah Silverman and Paul Simon appearances at the Democratic Convention Monday night, I began to wonder if Lorne Michaels was producing this thing.

If he was, he would know better than anyone else that if he could have engineered a reunion of Simon and Garfunkel, the “Bridge Over Troubled Water” bit would have gone over a whole lot better. God bless Paul Simon, but the man’s voice is apparently shot -- or at least it failed to show up Monday night. He could have used Art Garfunkel’s help, especially on this song with its soaring high notes.

The Simon performance seemed slapdash, lacking the customary polish his concerts are known for. Maybe the booking was made at the last minute, the result of someone having the bright idea over the weekend that if Simon could be persuaded to come down to Philadelphia and sing “Bridge Over Troubled Water,” it would help bridge the gap between the Hillary Clinton and Bernie Sanders factions of the Democratic Party.

Instead, the Simon segment played like a PBS pledge month concert special, complete with adoring oldsters caught on camera in the audience swaying to the music. This is the party of the future? A song harkening back to 1970 (the year “Bridge Over Troubled Water” was released) didn’t seem like the future to me.

Sarah Silverman had already stolen the show anyway -- probably to the chagrin of the convention’s organizers who still had Cory Booker, Michelle Obama, Elizabeth Warren and Sanders himself -- a veritable “murderers row” of Democratic superstars -- lined up to speak.

Silverman, who once worked at “Saturday Night Live” for a single season, was paired with Al Franken, now a United States senator from Minnesota and once an “SNL” writer. You can almost hear the person who put them together making his (or her) pitch: “He’s with Hillary! She’s feeling the Bern! Together, they’re uniting the Democrats!” Not.

Instead, Silverman got booed, something she is apparently not accustomed to. So she lashed out at her audience for daring to ignore her directive to convert their love of Bernie into support for Hillary. “Can I just say to the Bernie-or-bust people, you’re being ridiculous!” she said angrily, wagging her finger like a schoolteacher lecturing a class of unruly 10 year-olds.

It became the most memorable quote of the evening and also demonstrated why so many people seem fed up in this election year with know-it-all elites talking down to them. As she stood up there with Al Franken, you could be forgiven for wondering: Why is Sarah Silverman on TV talking to me about the future of our country? Who died and made her comedian-in-chief?

Winning over the Sanders people to the Clinton side seemed to be the theme of Night 1 of the Democratic Convention. The Simon song and the Franken-Silverman gambit were followed by Michelle Obama trying to establish unity by extolling the Obama years and asking, unsurprisingly, that they continue with a Hillary Clinton administration. Then Elizabeth Warren (declared by various TV pundits to be the nation’s “most progressive” U.S. senator) attacked Trump and other rich people. And finally, Sanders himself hogged the podium until well after 11 o’clock Eastern time.

One of the notes I took summed it all up. At one point, I wrote, “What a pile of crap it all is.” At the time, I was reacting to the syrupy video by J.J. Abrams about the greatness of Michelle Obama, followed by her speech in which she championed Hillary Clinton’s lifetime of selfless service to women and children, and then Sen. Warren complaining that the federal government -- in which she plays a key role as a senator -- doesn’t have the funds on hand to repair bridges and roads because evil rich people won’t give the government more money.

Meanwhile, I’m sitting there thinking: The government has plenty of money -- rich people’s money and other people’s money -- but wastes too much of it. That’s the problem.

I will say this about the Democrats’ show in Philadelphia. They’re already making better use of this four-night prime-time opportunity to make their pitch to America than the Republicans did last week. The production values seem higher, and the star power greater.

This was only Night 1, and the fact is, the first night of any convention -- with all of its rough edges and stumbling blocks -- tends to be forgotten by Nights 2 or 3. That figures to be especially true this week as the Democrats’ weeklong infomercial -- airing free of charge on the nation’s TV networks -- features Bill Clinton on Tuesday, President Obama and Vice President Biden on Wednesday, and Hillary herself accepting her coronation on Thursday.