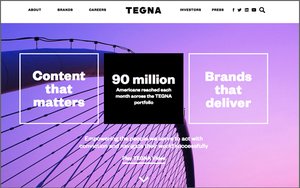 The McLean, Virginia-based company’s second-quarter media revenue grew 10% to $458.9 million, around $6 million below industry consensus. Much revenue growth was driven by retransmission fees, which were 33% higher to $145.8 million.

Political advertising came in at $10.2 million, up $7.5 million over the same period a year ago -- which, according to Barton Crockett, media analyst for FBR & Co., was $12 million less than anticipated.

Crockett says political advertising in the quarter was down 13% from the last presidential election in 2012 and down nearly 40% from the midterm elections in 2014.

But Gracia Martore, president/CEO of Tegna, said in an earnings release that political revenue has been a bit slow-moving: "We expect political revenue to ramp up steadily in the third and fourth quarters as a longer-than-usual primary process led to delayed ad buys from front running candidates."