Thrilla In Phila., Day 2: Idiotic Celebrities And One Masterful Speaker 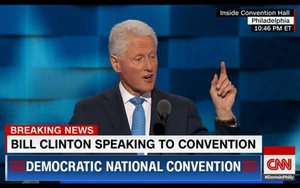 The Democrats’ reliance on celebrity speakers and performers Tuesday night in Philadelphia was certainly shrewd.

Americans -- especially young and foolish ones -- are particularly slavish in their adoration of celebrities these days. While watching a political infomercial such as the Democratic Convention, you can imagine the multitudes declaring in unison: If all of these celebrities are for Hillary, then I am too!

Celebrities today love to be seen as activists -- especially if it’s for causes few would take issue with, such as adopting unwanted cats and dogs, for example. In the case of the current battle between Democrats and Republicans, Democrats are like the cool kids in the lunchroom. Everyone wants to sit with them, or so it seems.

Make no mistake: Tuesday night’s cavalcade of stars at the Democratic Convention was a home run, in contrast to the comparatively lifeless Republican Convention last week. The YouTube-ready video shown at the end of the night’s proceedings featuring a gaggle of celebrities singing a song called “Fight Song” was particularly brilliant. It was the kind of thing the Republicans didn’t, or perhaps couldn’t, do.

Personally, I have no clue why celebrities like Lena Dunham, America Ferrera, Elizabeth Banks and all the others seem to have this hypnotic hold over so many. Well, maybe Meryl Streep I understand. Everybody loves her, right?

My reaction to celebrities is generally derisive. On Tuesday night, while rolling my eyes over some celebrity’s idiotic gibberish, I was reminded of something Homer Simpson said wonderingly about rock stars in a long-ago episode of “The Simpsons.”

“Rock stars,” Homer said dreamily, “is there anything they can’t do?” The writers of that line were being sarcastic, of course, but in the real world, many people actually seem to believe celebrities can do anything and know everything.

So many actors (please don’t use the word “actress” anymore -- that’s so Republican!) and other famous people from the entertainment sphere were on hand at the Democratic Convention Tuesday night that you had to wonder when the first Kardashian would show up. Perhaps they’re being saved for Nights 3 and 4.

Meanwhile, with no Kardashians in sight, it was up to Debra Messing, that towering intellect of “Will and Grace,” to declare Hillary the hero of 9/11. This is a big pet peeve of mine: People using 9/11 to sell things or, in the case of a political campaign, to brag about what the candidate did or how he or she experienced that terrible day.

The Democrats clung tastelessly to 9/11 for about a half-hour Tuesday night, as if trying to seize ownership of an attack on America that affected us all, regardless of politics, religion, color or anything else. Here’s hoping the Democrats got 9/11 out of their system on Tuesday night and will refrain from bringing it up again, though I doubt they will be able to control themselves.

If their goal is to elevate Hillary Clinton to sainthood, then they don’t really need to evoke 9/11 anyway. According to the speakers Tuesday night, Hillary is the champion of healthcare, the world’s greatest mother (cut to Chelsea beaming in the audience), and a leader on par with Harry Truman (well, Madeleine Albright thinks so!).

Before last night, I had no idea that Hillary had brokered peace in the Middle East and had thrown her arms around so many victims of human trafficking. How could I not know this? She must have the world’s worst publicist.

Some of the highest praise for Hillary came from her husband, which was understandable. His speech was the undisputed highlight of the evening. I’m not even a particular fan of his, but I have to give him all the credit in the world for his mastery of public speaking.

He gave a speech that was just a pleasure to listen to. He uses a conversational tone of voice that makes it seem as if he’s just a guy -- one who happens to be a great storyteller -- in a room talking to you. It was a masterful performance.

Still, I had this thought when the festivities concluded Tuesday night: Like the Republicans, the Democrats kind of want to have it both ways. They both are given to messaging that says America is great, while at the same telling you why it’s so terrible. So which is it: Great or terrible?

And if Hillary was so instrumental in fixing the world’s problems as Secretary of State -- as multiple speakers said on Tuesday -- then why is the world in such a mess? One answer would be: The speeches being made at these conventions are like advertising --  we all know most of it’s not true, yet we buy into it anyway.